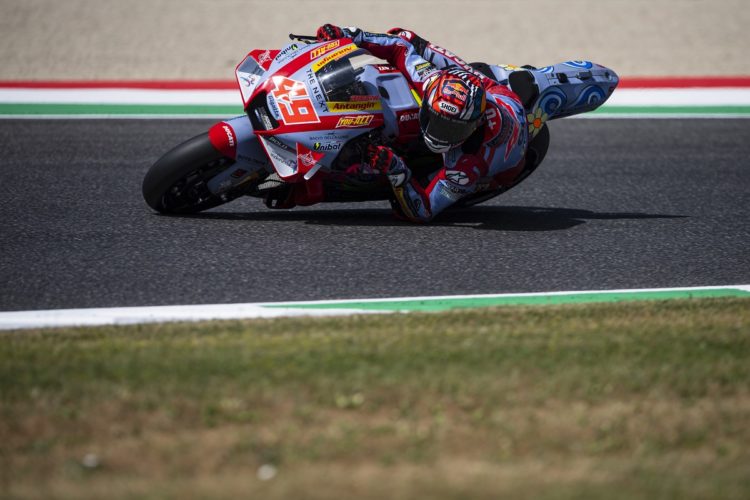 Having escaped Q1 in similarly stormy conditions that saw the track left damp – facilitating the need for the riders to use slicks rather than wets – Di Gianantonio was a man on a mission as Q2 got underway properly following an early red flag as a result of a nasty high-side for Honda’s Marc Marquez, his bike spectacularly setting alight shortly after the impact.

Di Gianantonio came out the blocks quickest as the session resumed around ten minutes later as fired in a 1:46.907s, though a flurry of improvements would see no less than four riders hit the front in only a few minutes, with the Gresini man and VR46’s Bezzecchi battling it out at the death.

With Bezzecchi having posted a 1:46.244s on his final flyer, Di Gianantonio held a slender advantage over his countryman three-quarters of the way around his last effort, though a blistering final sector saw him bang in a 1:46.156s tour to secure a first ever pole position in the premier class in just his eighth event.

Bezzecchi was therefore forced to settle for second ahead of team-mate Luca Marini, the three Italian’s completing an all Ducati front row in the manufacturers home event.

Johann Zarco and Francesco Bagnaia imporved Ducati’s day further still as they completed the top five on their examples, with reigning MotoGP world champion Fabio Quartararo finishing off the second row for Yamaha.

Aleix Espargaro was seventh for Aprilia ahead of LCR Honda’s Takaaki Nakagami, with the factory Honda RC213-V of Pol Espargaro ninth.

Enea Bastianini rounded out the top ten on the sister Gresini Ducati, while Jorge Martin and Marquez bagged 11th and 12th as the final two riders to take part in Q2.

Jack Miller narrowly missed out on a pole shootout chance after drafting Marquez into Q2 towards the end of the opening segment, the Aussie heading Ducati test rider Michele Pirro who managed a solid 14th in his first start of 2022.

KTM looked handy to get both its factory riders into Q2 at one point as it looked like rain was baout to soak the circuit while Brad Binder and Miguel Oliveira ran first and second, though the duo were unable to hold position as the rain stayed away – leaving them 15th and 16th in the end.

Suzuki’s pairing also struggled for laptime on the tricky Mugello surface, Joan Mir ending up a lowly 17th while Alex Rins once again will have to put on a Sunday charge from 21st.

Having looked strong throughout practice, Maverick Vinales struggled to make his RS-GP work in the difficult climactic conditions and lagged to 24th ahead of only Tech 3 KTM’s Raul Fernandez and RNF Racing Yamaha’s Andrea Dovizioso.