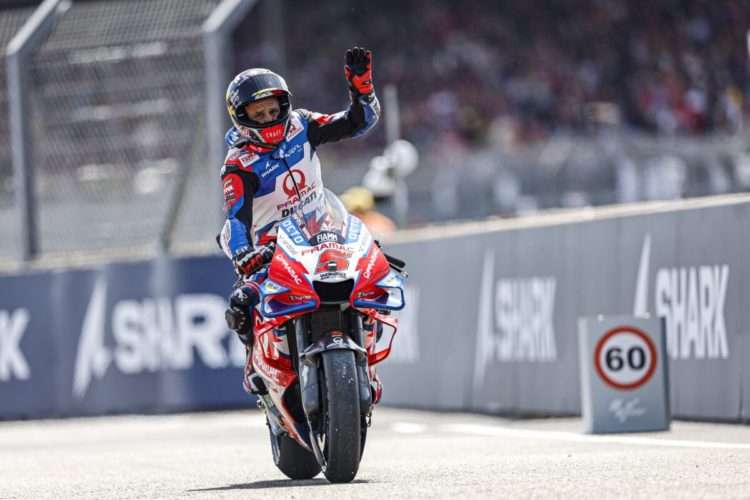 Johann Zarco reckons he is closing the gap to the front-running MotoGP contenders following a solid start to 2022 after fighting back to fifth in the French Grand Prix.

Having received a three-place grid penalty for blocking Honda’s Pol Espargaro in qualifying – a punishment that dropped him from sixth to ninth before the race even started – home hero Zarco then dropped to tenth on the opening lap before colliding with KTM’s Brad Binder after running wide at Turn 6 soon after.

Having survived his hit from the South African, the Pramac Ducati rider then showed his strength by battling forwards to fifth by the end of the encounter, a result he feels was “probably the best” he could have achieved, Zarco admitting he currently isn’t feeling “100% relaxed” with Ducati’s 2022-specification Desmosedici, but that he is getting “closer” race by race.

“It was a good race, it was probably the best I could reach because even if I could have had a better start it would have been a tough race because something was still missing in my pace,” explained Zarco.

“I was fast enough for fifth position, but I feel that I didn’t unlock everything to become faster and start thinking about a victory or to be on the podium today.

“I’ll keep working with the team because I feel I am getting closer and we are growing up on the bike, but I’m still not 100% relaxed and when this comes I’ll enjoy myself much more.

“It’s been a huge week since Thursday with a lot of crowd around the track that makes you feel like a superstar because you cannot go anywhere and they are all screaming your name, they all want a picture or autograph which gives a nice energy.

“You realise after the weekend that while it is a nice energy, it’s also takes some away from you and to finish the race with a top five and Fabio in P4 can leave us feeling relaxed and we can use the next week before Mugello to recover and be feeling 100% for the next races.”

Zarco revealed post-race that he initially believed it was team-mate Jorge Martin that clipped him in his Turn 6 incident with Binder, the Frenchman theorising that differing lines into the bend between the pair was the main catalyst for the collision.

“I didn’t know it was Brad (Binder, early collision) I thought it was Jorge Martin because I’d just overtaken him before,” continued the two-time Moto2 world champion.

“But then I got overtaken at the beginning of the chicane and I went wide, Fabio (Quartararo) and (Takaaki) Nakagami got me back and then at Turn 6 I tried to take the inside line to try and pass Nakagami but I think it surprised Brad because he is the kind of rider to go quite fast into the corner.

“This is why I think he was surprised and touched me, but I didn’t crash and that was the main thing and the bike didn’t have any damage so it was good to be able to continue.”