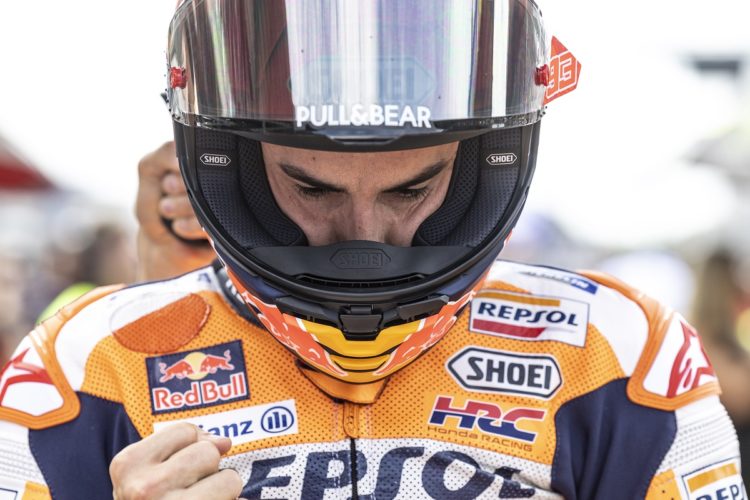 Marc Marquez says that running within the top six is currently neither his nor Honda’s “real position”, conceding that he does not “feel well” riding the RC213-V.

The factory Honda ace managed to put in a solid race to bring his machine home in sixth in the French Grand Prix, albeit over ten seconds adrift of the podium positions and over four adrift of Johann Zarco having been passed by the Pramac Ducati rider just past mid-distance.

Marquez and Honda failed to find any meaningful gains in the recent MotoGP test at Jerez following the Spanish GP with the Japanese manufacturers pilots having struggled in recent races, the six-time premier class champion admitting that he currently “does not feel well riding or with the bike” and that running within the top six is currently “not the real position.”

“It is true that the bike is not working in the best way as even with the way I am feeling physically I’m still the top Honda but this is not the target, my objective is to finish on top of the podium and we are far (away),” explained Marquez.

“We need to keep working to understand the situation and the problems in order to improve for the future races.

“We cannot think about the championship, we finished the first race in fourth position and now we are suffering to finish in fifth or sixth so we cannot even think about this.

“I do not feel well riding or with the bike, OK some tracks I can be fast following somebody but I do not feel that I’m riding in a good way and we are too far from the top guys.

“This was not the real position, it was ninth because three riders ahead crashed but this is part of the game and we did a solid race.

“In Portimao we finished 15 seconds behind, Jerez 15 seconds and here 15 seconds down again so there is still a long way to improve.”

Marquez added that he is also currently still struggling to push for the entirety of a grand prix distance, having admitted at the previous round at Jerez that he is still having to preserve energy throughout Friday practice in order to give himself the best chance of being able to push 100% throughout qualifying and the race.

“I said yesterday that our ideal position on pace was between fifth and seventh, and we finished sixth,” continued Marquez.

“The race was too long and I felt tired and struggled to push until the end, I’ll keep working and trying to improve and sixth is a decent way to go for the future.”