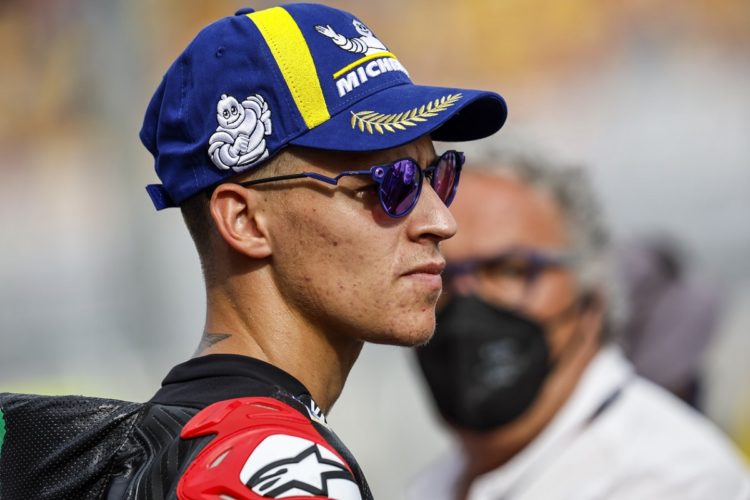 Fabio Quartararo has demanded that his Yamaha squad need to “take more risk” with the development path of its M1 prototype following a tough French Grand Prix outing.

The reigning MotoGP world champion ended up missing out on a home rostrum following a sluggish start that dropped him as far as ninth in the early stages, before later recovering to fourth – his series lead reduced to just four points over Aprilia’s Aleix Espargaro, who ended up third at Le Mans.

The Frenchman was expected to fight for the win at the classic venue due to the rapid race simulations he posted throughout practice, though following his compromised start he struggled to overtake the riders ahead as a result of his ongoing power-related issues with his machine.

Quartararo was insistent after the race that he needed Yamaha to start bringing developments to the track faster if he was to remain in title contention across the entire year, urging the Japanese marque to “take more risks” with bringing parts earlier than it currently does.

“We need something from them (Yamaha), we have to take more risk because we now arrive at two tracks with 1 kilometre straights and we know if we cannot find anything it will be a bit of a disaster, but I’m always riding to my 100% and won’t give up,” explained Quartararo.

“Looking at the others (manufacturers) it looks like they are playing much more with the rules in every way, and it seems we have too much margin so I think any risks in terms of development.

“If they have found something, don’t wait three or four months to have it on the bike, as soon as we find something take the risk to use it and see how we do, we have to do something because I don’t know how we are still first in the championship.”

Quartararo added that he expected “much better” from the French GP off the back of his strong practice form, the nine-time premier class race winner ruing the fact he could only overtake another rider if they “crashed in front of me or made a mistake.”

“I expected much better from the race, my start was not good and then I had the pace of the top guys but it was impossible for me to do better because I couldn’t get any opportunity to make an overtake,” continued Quartararo.

“Every time I overtook was because someone crashed in front of me or because they made a mistake, I didn’t make any overtakes during the race so it is really frustrating and we need to make a big change.

“I nearly had a few crashes during the race, but I never gave up pushing for the podium today.

“The first races were a disaster, and even though the last couple were good today we cannot make do with finishing fourth on a track like this, we needed to fight for much more.”