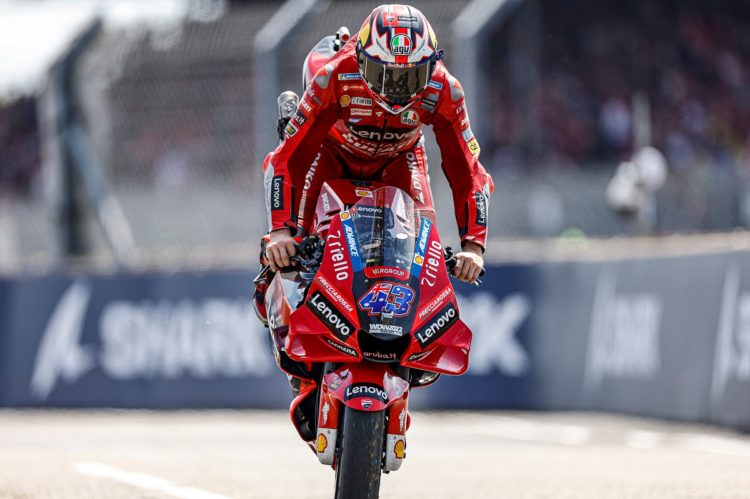 Jack Miller was left satisfied to score his second MotoGP rostrum of the year at Le Mans after taking a “gamble” by running the soft compound front tyre.

With unexpected high temperatures hitting the French venue on Sunday, many of the front-running pilots elected to switch from the soft-compound front to the medium compound, which theoretically gives a greater amount of front end stability in hotter conditions.

Miller though opted to stick with his “gut instinct” and run the soft front after struggling to make the medium work throughout practice, the Aussie admitting he didn’t feel confident with the harder-compound rubber after several crashes with it in practice.

“Today I took a gamble with the soft front tyre but it was just my gut instinct because everytime I used the medium compound this weekend I crashed around four laps in (to the run), I couldn’t get the thing to work,” explained Miller.

“It felt mega the first two laps and then I would get no feeling or warning that I was even close to a crash, so with the soft front I was getting a lot of good feedback from it – even though I was getting a lot more front-locking and understeer from it.

“But I could feel and understand where I was with it in terms of knowing whether I could push or not, I think it paid off as Pecco (Bagnaia) wanted to push the pace early on and I was keen to stick to my pace through the whole race and that’s what I did.”

Miller revealed that he “sort of allowed” team-mate Francesco Bagnaia through into the lead having led the opening few tours after not wanting to take too much life from his softer front tyre too early, a conservative approach that he feels was crucial to his runner-up result after Bagnaia would later crash out shortly after being dumped from the leadership by eventual winner Enea Bastianini.

“We’ve had a solid year but the crash in Portimao wasn’t ideal and we are only a third of the way through the year, we are putting together a solid campaign and we just need to keep working away at it,” continued Miller.

“I sort of allowed him (Bagnaia) through, he went a big quicker the first lap but then he plateaued as well and he started having moments with the front and then Enea (Bastianini) came through, he was moving.

“He is always really good on the tyres and was driving off the corners really well, but then with ten to go I felt pretty good and felt I was coming back towards them as I worked out how to ride around the issues I was having with the front and make the most of the grip I had.

“In the end I didn’t have enough for him today, Pecco tried to push to stay with him and it cost him, so solid points for the championship and a good day so I’m happy.”