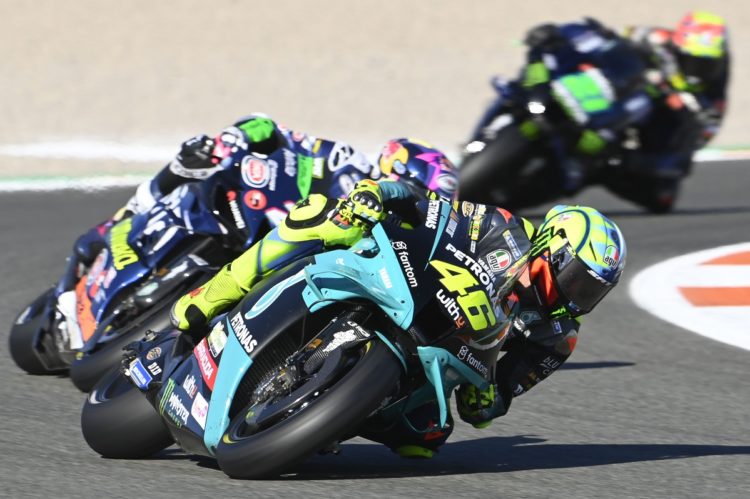 The iconic number 46 that the recently retired Valentino Rossi ran for the entirety of his motorcycle grand prix career will be resigned from MotoGP next month at Mugello.

The Italian ran with the 46 across all 26 of his seasons racing across all classes, the number accompanying him to a grand total of nine world titles – including seven in the premier class – as well as all of his 115 race wins and 235 total podium finishes.

MotoGP announced on Saturday at Le Mans following qualifying for the French Grand Prix that the number would be retired from use in MotoGP as a mark of respect for Rossi, with the now GT World Challenge racer set to take place in the ‘retirement ceremony’ on Saturday at Mugello for the Italian GP in two weeks time.

“The number 46 will be retired from use in the MotoGP™ class at the Autodromo Internazionale del Mugello,” read a short statement from MotoGP organisers Dorna.

“Synonymous with nine-time World Champion and MotoGP™ Legend Valentino Rossi, the number will be signed off in style at the upcoming Gran Premio d’Italia Oakley.

The retirement ceremony will take place on the main straight on Saturday, just ahead of qualifying.

“Rossi will be in attendance as his legacy is honoured and number retired, having raced the number 46 into the MotoGP™ Legends Hall of Fame over 26 seasons of success – creating one of the most recognisable calling cards in global sport.”

Rossi elected to retire from two-wheeled professional motorsport at the end of a tough 2021 MotoGP campaign with the Petronas SRT Yamaha outfit, in which he breached the top ten on just four occasions en-route to a lowly 18th in the riders standings.

He decided to make the full-time switch to car racing for 2022, Rossi joining GT racing powerhouse WRT to pilot one of the Belgian squad’s Audi R8 LMS Evo II GT3 machines in the entirety of the GT World Challenge Europe series.

He also continues to run his VR46 MotoGP team for pilots Marco Bezzecchi and half-brother Luca Marini, though while in France this weekend he is currently racing in the GT Challenge Sprint Cup round at Magny-Cours roughly 340 kilometres away from his MotoGP peers, who are competing at Le Mans for the French GP.