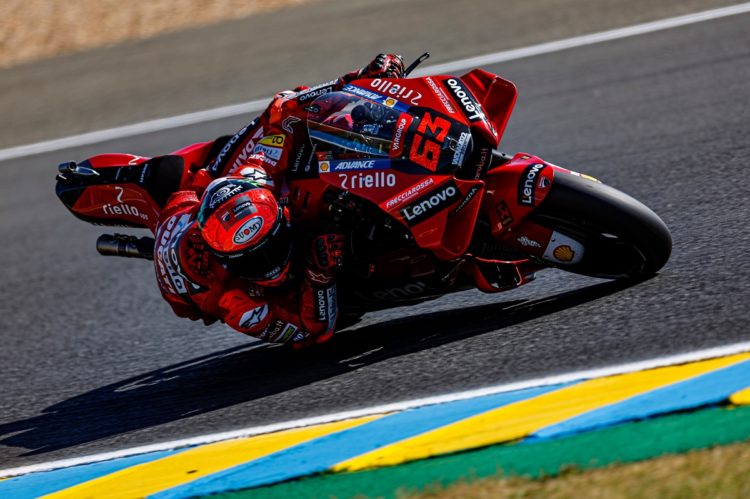 Francesco Bagnaia stormed to his second successive MotoGP pole position at Le Mans with another lap record of the French circuit to head a Ducati 1-2 ahead of Jack Miller.

Bagnaia remained in close range of his second pole of 2022 following the opening runs of Q2 at a bright and sunny Le Mans as he lapped just 0.011s adrift of provisional pole-man Fabio Quartararo, though his time was over a tenth-of-a-second away from his FP3 effort on Saturday morning.

A mistake on the first of his final two push laps meant it was a case of all or nothing on his final gambit, though the Italian was firmly up to the task as he banged in another all-new two-wheeled lap record of the classic venue – a 1:30.450s – to move to the head of the times, Bagnaia also helping team-mate Miller into second by virtue of his slipstream.

Quartararo therefore was left with it all to do try and score a home pole position, and despite posting several fastest sectors he ultimately came up short on improving his earlier benchmark on both his final attempts – leaving him a disappointing fourth after Aprilia’s Aleix Espargaro managed to sneak onto the front row at the death.

Enea Bastianini ended up completing the top five after a potential pole-challenging effort bled away towards the end of the session, with FP3 leader Johann Zarco ultimately failing to replicate his morning pace en-route to sixth on the grid.

Joan Mir won out in the battle of the Suzuki’s despite having to graduate through Q1 as he grabbed seventh just ahead of team-mate Alex Rins, while Jorge Martin was ninth having also escaped Q1 on his Pramac Ducati.

Honda once again looked to struggle in the hotter conditions of the afternoon relative to the cooler mornings as its three riders rounded out the pole shootout contenders, Marc Marquez the fastest of the trio in tenth ahead of factory team-mate Pol Espargaro and LCR man Takaaki Nakagami.

Marco Bezzecchi was the best-placed rookie in 13th having narrowly missed out on a chance to escape the opening segment of qualifying, as did the other Aprilia of Maverick Vinales down in 14th.

KTM was left longing for a French escape after its dismal weekend continued with all four of its riders failing to reach Q2, Miguel Oliveira the highest-classified RC16 in 17th just ahead of team-mate Brad Binder in 18th.

Yamaha’s other pilots also struggled at Le Mans with the sister factory M1 of Franco Morbidelli a distant 19th ahead of the RNF Racing example of Andrea Dovizioso in 20th.

Alex Marquez meanwhile continued to lack the pace of his fellow Honda brethren, the Spaniard able to manage a lowly 21st on the grid on the second of the LCR-entered RC213-V’s.