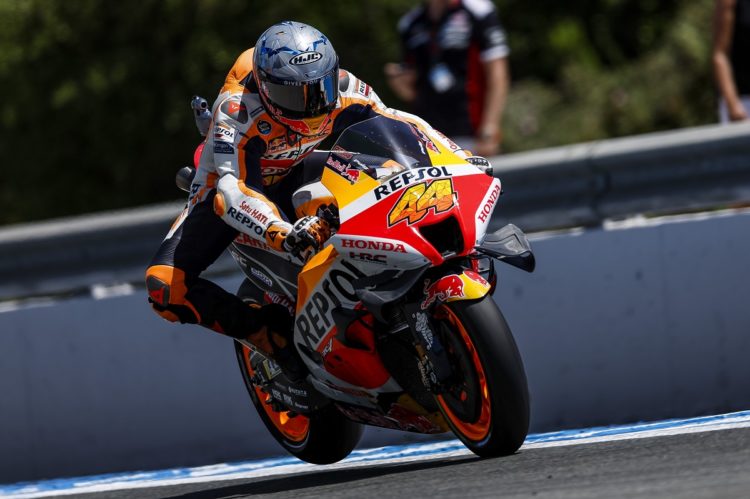 Pol Espargaro led the way in opening practice at Le Mans for the French Grand Prix with a late flyer that put him 0.109s clear of Suzuki’s Alex Rins.

Espargaro spent the majority of the session floating around the lower extremities of the top ten, though he began to climb up the order in the closing minutes as the bulk of the riders bolted on fresh tyres in preparation for a time attack.

The battle for the top spot looked likely to be settled between home hero Fabio Quartararo and defending Le Mans winner Jack Miller, the Aussie getting bumped to second by the Yamaha racer with just seconds remaining.

Espargaro blew the pair away though with his closing gambit, the Spaniard posting a 1:31.771s that would ultimately grant him FP1 honours by just over a tenth-of-a-second ahead of Rins who moved up to second at the death, while a similar late improvement by Francesco Bagnaia left the Jerez victor third overall.

Quartararo was therefore forced to make do with fourth ahead of Aprilia’s Aleix Espargaro, with the sister Suzuki GSX-RR of Joan Mir completing the top six.

Miller was ultimately shuffled back to seventh as a result of the late flurry of improvements ahead of Maverick Vinales’ – who led the session early on – with the customer Ducati’s of Johann Zarco and Luca Marini rounding out the top ten.

Marc Marquez performed one of his miracle saves at the Garage Vert double right-hander after losing the front of his Honda while riding over the kerbs on the outside of the bend, though the six-time champion would end up only 13th overall in the end.

KTM meanwhile suffered throughout not only for speed, but also stability as three of its four pilots ended up crashing at some point during the 45-minute test.

Its fastest representative ended up being Brad Binder in a lowly 18th despite a crash at Turn 3 early on, while Miguel Oliveira went down on two occasions – firstly at Turn 10 before later having a spill at Turn 6 – on his way to the 21st best time, while Raul Fernandez also crashed at Turn 10 en-route to 23rd overall.

Franco Morbidelli’s struggles continued meanwhile as he ended up a distant 20th on the second factory Yamaha entry, the Italian going down at Turn 11 to add to his woes.