Berger tips Russell to ‘soon get on Hamilton’s nerves’ 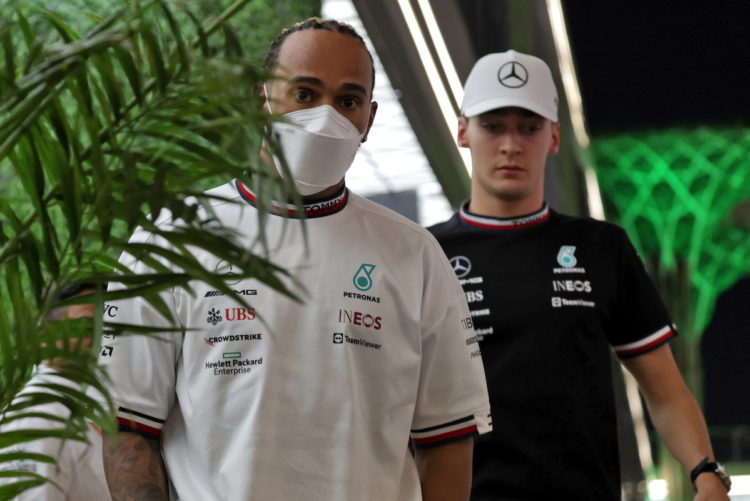 Ex-Formula 1 driver Gerhard Berger believes that George Russell will begin to “get on Hamilton’s nerves” in the near future.

Russell joined Mercedes at the start of the 2022 campaign, having spent several years associated with the team as a junior driver.

The former GP3 and Formula 2 Champion was paired with Lewis Hamilton, who is currently in his 10th season with the Mercedes outfit.

In the early stages of the 2022 campaign, Russell has enjoyed a consistent run of four top-five finishes, while Hamilton has appeared to struggle more at the wheel of the W13 car.

In Saudi Arabia, the seven-time World Champion failed to progress past Q1 in qualifying, before ending the race in 10th place.

Last time out at the Emilia Romagna Grand Prix at Imola, Hamilton didn’t score points amid a difficult weekend for him and the Mercedes squad.

Russell is only Hamilton’s third team-mate at Mercedes since 2013, and Berger believes that the young Briton will start to annoy the veteran during his string of strong results.

“He will soon get on Lewis’ nerves,” Berger said, quoted by Speedweek.com.  “Russell was one of the outstanding drivers at Imola. Like Lando Norris and Max Verstappen.”

Mercedes’ slump this year has come following the introduction of new technical regulations, aimed at allowing for closer racing on the track.

Berger has commended the job done by F1, believing the opening four races of the 2022 campaign have injected a new level of excitement into the sport.

“Hats off to Ross Brawn [Formula 1 managing director], who was in charge of making the regulations,” said Berger.

“The cars look better, the drivers can overtake, the races are exciting.”