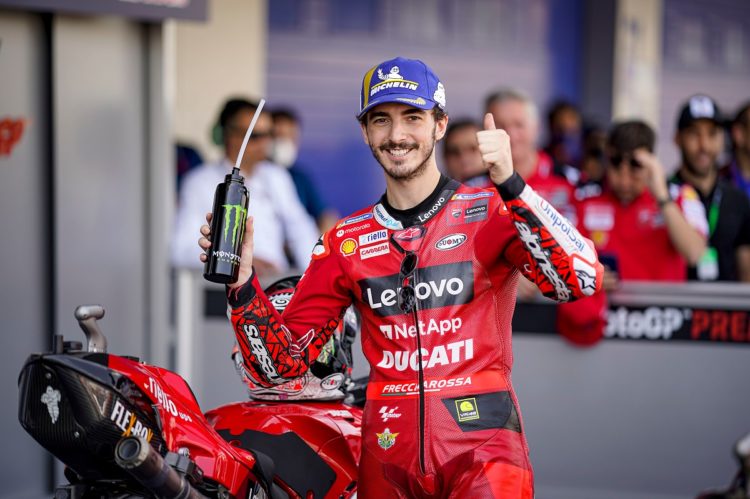 Francesco Bagnaia reckons his blistering lap of the Jerez circuit that secured him pole for the Spanish Grand Prix was the “best I’ve ever completed in my life.”

The factory Ducati rider dominated proceedings on Saturday at Jerez after scoring scratch times in both the morning FP3 outing as well as FP4 just prior to qualifying, before then schooling his rivals in the pole shootout.

Having sat second following the initial runs in the dash for pole behind series leader Fabio Quartararo, Bagnaia crafted what he described as a “perfect” 1:36.170s gambit to post a new two-wheeled lap record of the historic venue, a time that left him a commanding 0.453s up the road from second-placed Quartararo, who was expected to dominate the event after leading the way on Friday.

Having broken Quartararo’s record of qualifying on pole in every one of his premier class attempts, Bagnaia reckoned that his effort was “the best lap I’ve ever completed”, and admitted that he was unsure he could even achieve a 1:36.5s lap-time that he believed would be enough to score pole.

“After all the hard work we’ve put in since the first test, I’m so happy,” said Bagnaia.

“Finally our potential is coming because today was the best lap I’ve ever completed in my life, everything was perfect.

“I thought pole position would be a 1:36.5 or 6, I was not thinking I could do this lap-time but everything was ideal.”

The 2021 premier class vice-champion – who is yet to stand on the rostrum after the opening five encounters of 2022 – doesn’t think he will enjoy the same level of dominance in Sunday’s Spanish GP however, conceding that Quartararo still enjoys “one or two tenths” per lap in race conditions, though nonetheless still reckons it will be “possible to fight with him.”

“For tomorrow I think Fabio (Quartararo) still has a bit of a gap compared to me, but in FP4 we were closer, but the race will be long and it’s very important to manage the tyres around here, so let’s see,” continued Bagnaia.

“It’s hard to predict now, but I feel confident to fight.

“I think we are still missing one or two tenths (of a second) per lap (for Quartararo in race), but yesterday we were three (tenths behind), we are closer today so now we are thinking it will be possible to fight with him tomorrow.”