Marquez getting ‘no feedback’ from ‘uncomfortable’ Honda 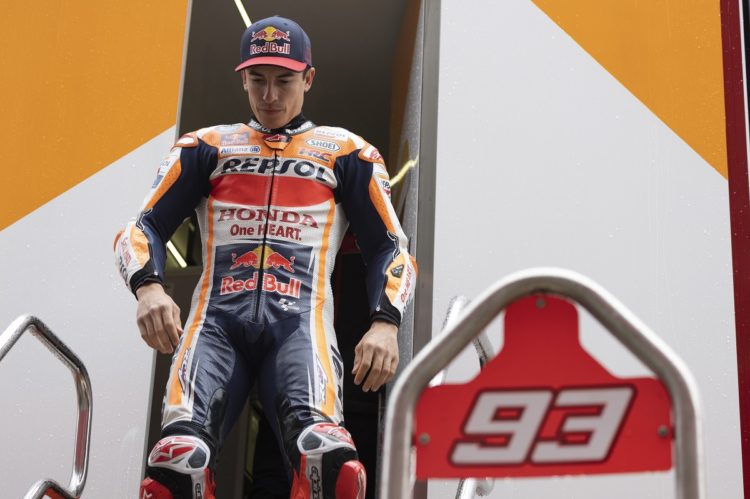 Marc Marquez has rued the lack of feeling he is currently getting from Honda’s MotoGP 2022-specification RC213-V, the Spaniard admitting the machine is giving him “no feedback.”

The six-time premier class champion managed to finish as the highest-classified Honda rider in the Portuguese Grand Prix after passing LCR rider and brother Alex on the final tour, though he ended up taking the chequered flag over 16 seconds adrift of race winner Fabio Quartararo’s Yamaha as well as ten seconds behind the Ducati and Aprilia prototypes of Johann Zarco and Aleix Espargaro.

An even bigger concern was that he crossed the line a full 6.5 seconds away from the fourth-placed Suzuki of Alex Rins, despite the GSX-RR man having to take the start from a lowly 23rd on the grid.

Marquez conceded that Honda are still “too far from the top guys” with its new bike, and is currently worried that the potential of the machine is not as high as had been previously hoped, affirming that “normally with a good bike you can go out and go fast” straight away, even despite taking into account trying to find optimal settings for a new bike.

“It was a nice battle with my brother Alex (Marquez), but it is not the position we are looking for,” said Marquez.

“We finished sixth but too far from the top guys, our speed was not there today and my feeling and confidence with the bike was not there.

“Since the beginning I struggled but during the race I fought to try and get better and better, but the pace was just not there so everything becomes more difficult, nevertheless we could fight and finish sixth but we need to find something more in Jerez if we are to fight for the podium.

“We can say it is because it is a new bike on a circuit for the first time, but normally with a good bike you can go out and go fast, when you feel comfortable with a bike it doesn’t matter what the conditions are or whether it’s the first or second time you are simply fast.”

Marquez is hopeful that he can try and make a step with the feeling of his RC213-V this weekend at Jerez, warning that a championship charge would be impossible unless the organisation could “make a step” soon.

“At the moment we are looking to find the confidence with this new bike, Jerez will be an important weekend and then we have an important test, the season is very long but we need to make a step if we are to fight for the championship,” continued Marquez.

“This weekend I felt overall uncomfortable with the bike, I was just getting no feedback and yesterday when I went out in the damp conditions where I’m normally very fast I couldn’t feel the bike and I was missing something.

“We need to look for a solution not only with the bike but also from myself and the team to find a way (forward), but we’ll stay motivated and try to improve more at Jerez.”