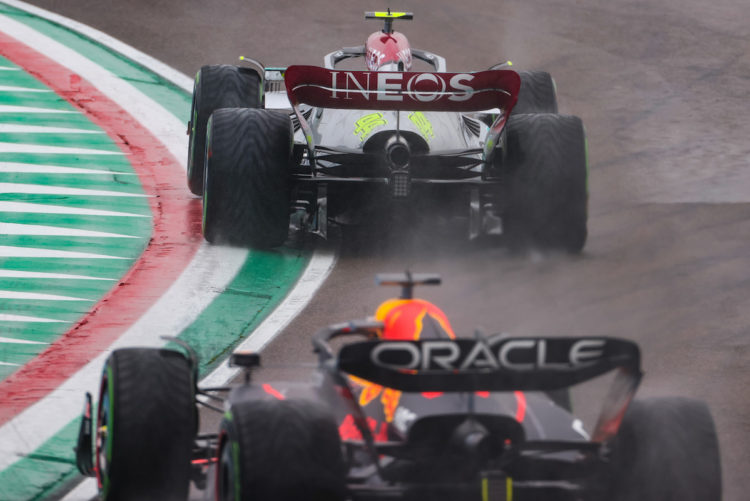 Hamilton ended the Emilia Romagna Grand Prix one lap down on Verstappen in 13th place, as he struggled to make progress throughout the race.

It marked a significant moment in the event, following Verstappen and Hamilton’s intense title battle during the 2021 campaign.

Verstappen took his second race victory of the 2022 season last Sunday, chipping into the championship margin he has to Charles Leclerc, who had his own difficulties at Imola.

Writing in a column for Verstappen’s official website, Verstappen senior said: “Honestly, I did enjoy seeing Max lap Hamilton, after everything that happened last year.

“Hamilton really had a tough time, whereas his teammate George Russell seemed to be more balanced. It’s not often you have the opportunity to lap a Mercedes.

“Max had an excellent weekend in Imola. I found him incredibly strong. He didn’t make a single mistake, was solid and completely in control.

“Red Bull clearly made a step in the right direction. Of course, we knew the car would get an upgrade in Italy, but with the weather conditions it was hard to make a comparison.

“But we can definitely conclude that we’ve become stronger.”

Verstappen also recently picked up the Laureus Sportsman of the Year award, an achievement that Jos has commended.

“Max was also chosen as Laureus World Sportsman of the Year. I never really thought about it, but I must admit I find it rather special,” he wrote.

“It is a big honour: he is the first Dutch person to achieve this award. We can safely assume that Max belongs to biggest athletes The Netherlands has ever had.

“Only on Monday I found out that he thanked me especially in his speech. I am very touched by this beautiful gesture.”