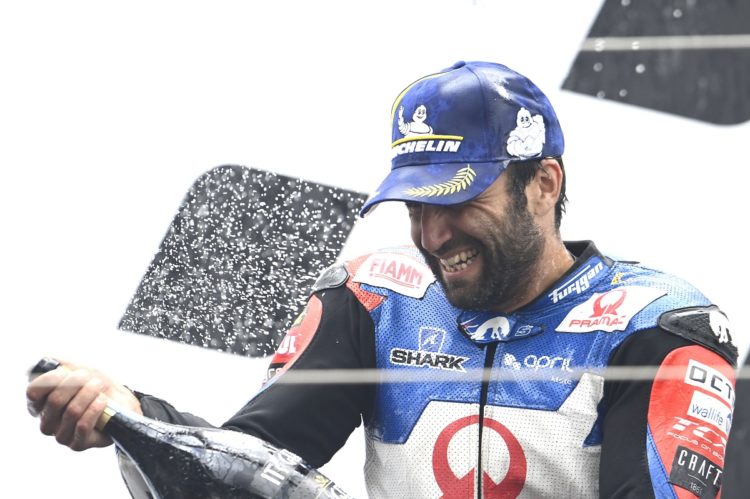 Johann Zarco says he is “happy” with his current performance level in MotoGP considering he still isn’t “feeling 100%” confident with the 2022-specification Ducati Desmosedici.

Having mastered the mixed conditions on Saturday to grab his first pole position of the season, Zarco fell to fifth on the opening lap of the Portuguese Grand Prix with a slow start – though he quickly moved himself back to third by the time two racing tours were completed.

The two-time Moto2 world champion later managed to get the better of Suzuki’s Joan Mir to move into his eventual finishing position of second, though he found himself unable to challenge countryman and runaway winner Fabio Quartararo for supremacy at the Algarve International Circuit.

Zarco conceded that he struggled to mount a realistic victory bid due to not currently “feeling 100%” with his machine, though he believes progress is being made in this area.

“I’m happy with the pace I currently have, although I still don’t feel 100% with the bike,” explained Zarco.

“With this result we can believe that the progress is coming, it shows we are making ground because Jack (Miller) was fast in the warm-up and race, though we are still not comfortable to do same kind of race as Fabio (Quartararo), so for now it is good to catch these points.”

Zarco admitted that he “knew I couldn’t fight” with Quartararo for the race win after seeing how quickly the reigning MotoGP world champion scythed through to the lead from fifth on the grid, electing instead to “save energy” throughout the race in order to secure a second rostrum result of the year.

“It wasn’t a great start, from the start I knew I couldn’t fight (for win) because I was impressed immediately Fabio’s (Quartararo) pace, he was aggressive but also really fast,” continued Zarco.

“Alex Marquez also had an amazing start, but I was happy to feel good on the bike and the key part of my race was to pass Marquez and (Jack) Miller quickly because myself and (Joan) Mir had a really good pace, so I could control my race.

“I couldn’t pass Fabio because he was too fast, so it was better to save energy, but it was a good decision to overtake Mir nine laps from the end because Jack was strong and getting into second place I managed to avoid the crash they had together.

“Then in the last part of the race with Aleix Espargaro I had to have one last push to avoid an overtake from him, but 20 points today is more than enough to make me happy.

“Mir is a strong guy and in the tight and fast turns he was a bit faster than me, fortunately I could recover all of my time on the straight in fifth and sixth gear, and because of this I could control my gap with him.

“He started to struggle with the rear tyre at the end, so I could take advantage of that and pass him.”