Miller: ‘It’s never nice crashing from a grand prix, but it’s even worse taking an opponent out’ 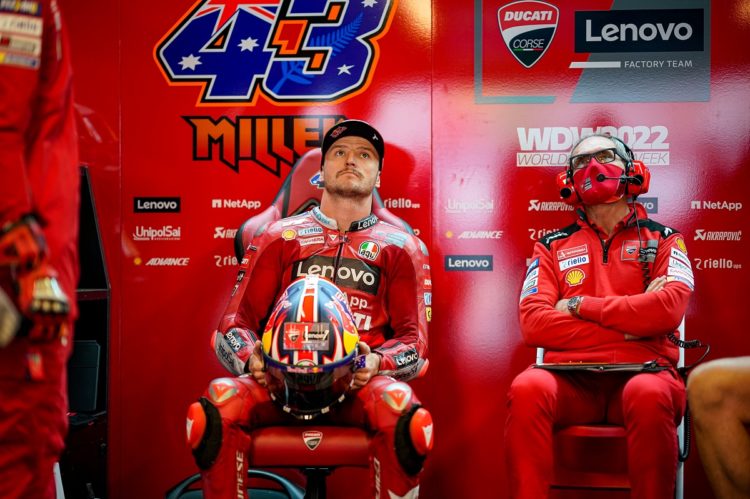 Jack Miller was left rueful following his early exit from the Portuguese Grand Prix after taking out Joan Mir while battling for third, the Aussie taking responsibility for the incident.

Miller ran well within the top five throughout the Algarve International Circuit encounter as he focussed on saving his tyres for a late push, a strategy that looked to be paying off as he closed on the battle for second between Mir and Pramac Ducati’s Johann Zarco as the race hit two-thirds distance.

With Zarco having already snatched the runners-up spot from the Suzuki, Miller was keen to get a piece of the action as he ranged onto the rear of Mir, the factory Ducati pilot opting to dive down the inside of the Spaniard at Turn 1 seven tours from home.

Miller was unable to pull up his machine though and lost the front, bowling himself and the innocent Mir out of the race on the spot.

The three-time premier class race winner was apologetic in the aftermath of the incident, admitting that it’s “never nice crashing out of a grand prix, but it’s even worse when you take an opponent out”, conceding that he was willing to “cop full blame” for the smash.

“I was pushing to get closer and closer to those boys in front, I managed the front tyre for the first 16 laps of the race and I put in some really decent laps at the end there,” explained Miller.

“I caught up to Johann (Zarco) initially but then he passed Joan (Mir) who was starting to struggle, I was trying for about three laps to get close enough to pass him at Turn 1 and I felt like I finally got close enough, but then as I went in I locked the front.

“I’m not sure whether there were some patches (damp) on the inside, I could have touched one of them I don’t know but it was strange as I felt pretty strong there.

“It’s never nice crashing out of a grand prix, but it’s even worse when you take an opponent out so I’m so sorry to the whole Suzuki team and especially to Joan for taking him out of a solid podium position.

“You never want to see an opponent hurt and when you crash there it’s never nice, so it was one of those things and I know what I did and I cop full blame for it.”

Mir was left understanding of Miller’s error post-race after receiving an apology, the 2020 MotoGP world champion while believing the move was “too optimistic” accepted that he too had made similar mistakes in the past, and that he was keen to “move onto the next one.”

“I think this is something that can happen, we were both really on the limit and he was probably just too optimistic with that manoeuvre,” said Mir.

“I’ve made mistakes like this in the past so I expect he will learn from it like I did, and we will move on to the next one.”