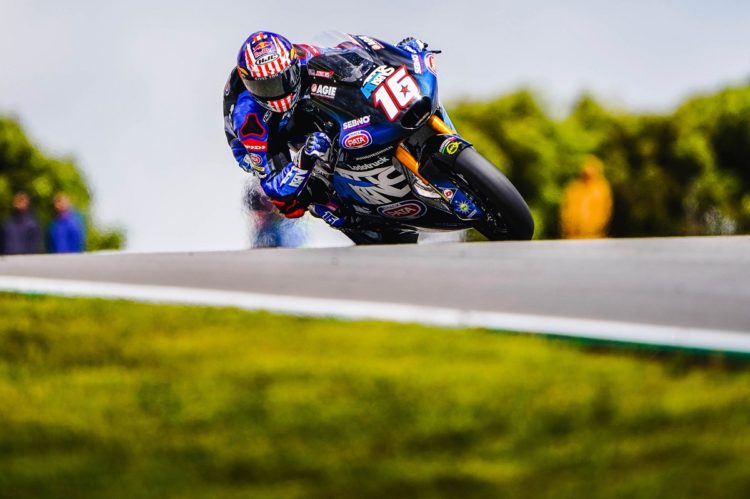 Joe Roberts streaked away to a first ever Moto2 race win in a shortened Portimao encounter following a ten-rider crash as rain started to fall in the original contest.

Aron Canet, Cameron Beaubier as well as AI Ogura battled for the lead in the original 23-lapper before all three – as well as a further five of the top ten runners – crashed out on lap nine as rain started fall at Turn 2, a total of ten riders going down but luckily all escaping serious injury.

The event was red flagged as a result while the assortment of crashed intermediate class machines were cleaned up, with a restarted seven lap sprint race announced to take place sooner afterwards.

All of the riders that crashed out were ineligible to make the restarted contest however, meaning Aspar’s Jake Dixon effectively started from pole ahead of Roberts with the duo having run seventh and eighth prior to the red flag.

Dixon made a strong start to lead away the re-ignited race, though the Brit’s hopes for a maiden Moto2 win would come to nothing after he tucked the front of his bike at Turn 7, allowing Roberts to take over the leadership.

The Italtrans pilot soon checked out as he built up a lead as high as four seconds at one point before eventually taking the chequered flag 2.8 seconds clear of the close battle for the runners-up spot, the American therefore securing his first ever grand prix success.

Celestino Vietti managed to survive all of the drama to bring his VR46-entered machine home in second despite a slow start to the restarted encounter, while Jorge Navarro completed the rostrum for Pons Racing.

Marcel Schrotter looked to have the speed for the rostrum after moving into second early on, though dropped back as his peers gained in confidence to his eventual finishing position of fourth, the Dynavolt man heading series rookie Manuel Gonzalez who scored his best ever Moto2 result for the new Yamaha VR46 Master Camp outfit.

Fermin Aldeguer suffered for speed in the difficult-to-read conditions as he dropped from second early on to sixth by the end ahead of Jeremy Alcoba, while Bo Bensneyder brought his SAG Racing bike across the line in eighth.

Barry Baltus was ninth for RW Racing, with the top ten being completed by Gabriel Rodrigo.

With all of Vietti’s close championship rivals going out as part of the early race skirmish, the Italian now possesses a commanding 34 point lead over Ogura, with Roberts’ win lifting him to joint fourth overall with Canet having entered the weekend in ninth.