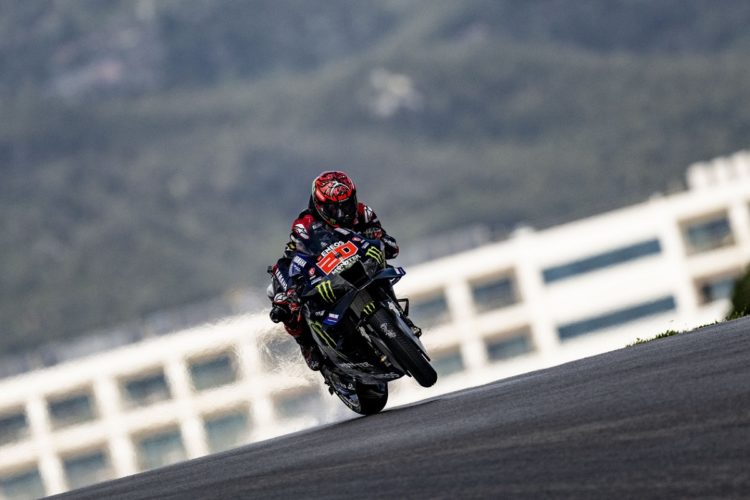 Fabio Quartararo dominated proceedings in Portimao to score his first MotoGP win of 2022, while points leader Enea Bastianini crashed out early on.

Quartararo made a quick start to immediately launch from fifth on the grid to third at Turn 1, before diving past pole-man Johann Zarco at Turn 3 just moments later to take second behind leader Joan Mir.

The reigning MotoGP world champion looked to have found an effective rhythm off the bat as he closed down Mir’s Suzuki over the opening few tours, Quartararo using his significant pace advantage through the final bend to slingshot past the 2020 premier class champion on the run to the first bend as soon as he reached him.

The Frenchman then checked out across the rest of the encounter as he crafted a lead as high as 6.5 seconds to take the chequered flag for his first win as a grand prix world champion, while Zarco ended up hanging onto second despite coming under pressure from Aprilia’s Aleix Espargaro in the closing stages.

Zarco fell all the way to fifth after struggling for form on the opening lap, though the Pramac rider soon managed to work his way back forward to take second from Mir as the race entered its final third, though factory Ducati rider Jack Miller and Espargaro were quickly closing on the rostrum tussle.

Zarco’s life was made slightly easier though as Miller took out Mir while trying to pass the Spaniard at Turn 1, the Aussie asking a little too much of his Desmosedici’s front tyre as he dived down the inside and lost the front, eliminating both from the contest on the spot.

This allowed Espargaro into third to put pressure onto Zarco, though the Argentina Grand Prix victor was forced to make do with his second podium finish of the campaign.

Alex Rins meanwhile put on a storming performance to take fourth from 23rd on the grid, the three-time premier class race winner utilising a blinding start that saw him rise to tenth by the end of the opening lap to score his fourth-successive top five result.

Miguel Oliveira gave his home fans something to cheer about as he completed the top five for KTM ahead of Marc Marquez, who managed to snatch away the position from brother Alex on the final circulation.

Francesco Bagnaia likewise pipped the other factory Honda of Pol Espargaro for eighth on the last lap, the Ducati pilot recovering from 25th and last on the grid to collect valuable championship points, while the sister Aprilia of Maverick Vinales rounded off the top ten.

Marco Bezzecchi endured a tough encounter after dropping all the way to 15th from sixth on the grid on the opening lap, the VR46 man forced to make do with a sole point from the weekend as Remy Gardner secured rookie honours in 14th.

Bastianini meanwhile saw his chances of a decent recovery ended after running wide at Turn 8 early on, the Gresini man losing the front of his Ducati and retiring from the race – therefore forfeiting his series lead to race winner Quartararo.

Brad Binder was another to fall victim to the Algarve International Circuit’s rollercoaster nature as he went down from 11th late on, while Jorge Martin’s race barely got started after he tucked the front of his Pramac machine at Turn 14.

Quartararo now holds the series lead as a result of his Portuguese success, though tied on 69 markers with the relentless Rins, with Aleix and Bastianini now three and eight points adrift of the duo respectively heading to Jerez for the Spanish GP next weekend.