Quartararo: ‘As soon as I was second I knew I was going to win’ 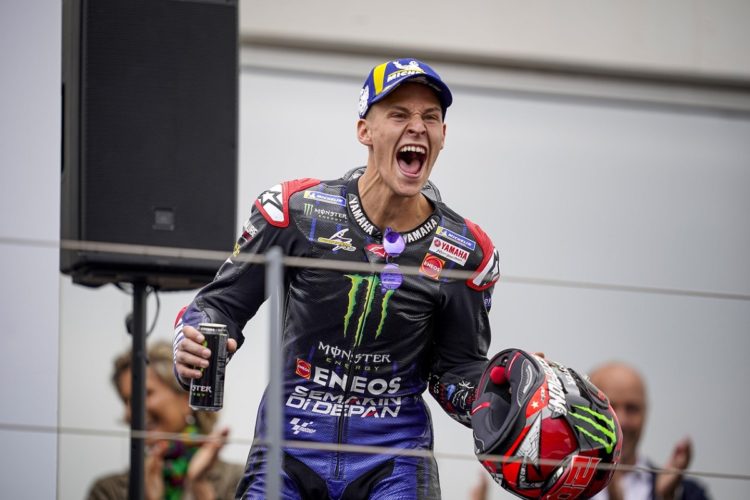 Fabio Quartararo has declared that “I knew I was going to win” the Portuguese Grand Prix following a strong start that saw him move from fifth to second in the opening three bends.

The Yamaha man made a lightning getaway from fifth on the grid to take third into Turn 1, before swiftly slicing down the inside of pole-man Johann Zarco to take second at Turn 3.

He wasted no time in running down the leading Suzuki of Joan Mir before snatching away the lead from the 2020 MotoGP world champion just four laps into the encounter, the Frenchman subsequently streaking away into the distance to secure his first win of 2022 by a commanding 5.4 seconds over Zarco.

A pumped Quartararo exclaimed after the race that he “knew I was going to win” after moving into second by the end of the opening circulation because of the feeling he had during the warm-up session ahead of the race, adding it felt “amazing” to pass Mir’s more powerful Suzuki on the straight purely as a result of his supremacy through the final bend.

“This morning I felt great and though we could maybe have the possibility to fight for the win, but I knew if we couldn’t make a great start then the victory was gone,” explained Quartararo.

“We achieved a great start and as soon as I was second at the third corner I knew I was going to win because I felt our pace was really great and I knew I could make a really good rhythm at this track.

“I was surprised to ride in the 1:39s for nearly the entire race because we had no time on track (in the dry) and when I saw these times I was shocked, but this is a great moment.

“I was quite calm, he (Joan Mir) was quite strong in a few areas but there was also some places where I struggled a lot last year like Turn 5, I’m missing so much there and he was faster than me but overall I felt much faster so I overtook him as soon as possible and tried to pull away.

“It feels amazing to overtake someone on the straight and then on the braking, so I feel so happy.”

The reigning premier class world champion added that he believes a title defence is “still on the cards”, affirming that he has been riding “exactly the same as I have today” in the early races despite not being able to show this through his on-paper results.

“The title is always on the cards, we’ll never give up and we know our weak points, I think everyone knows our top speed is really low but on this track with the hill and the last corner where I was going really well, the wheelie over the hill the bike was performing well but I was surprised to overtake the Suzuki on the straight,” continued Quartararo.

“In the first races I have been doing my maximum and riding exactly the same as I have today, it’s just they had big straights and tough parts for the Yamaha but this track is 50/50 for us, if we are in front we can achieve a massive result but if we are behind we can end up like last year when we crash from fifth or sixth.”