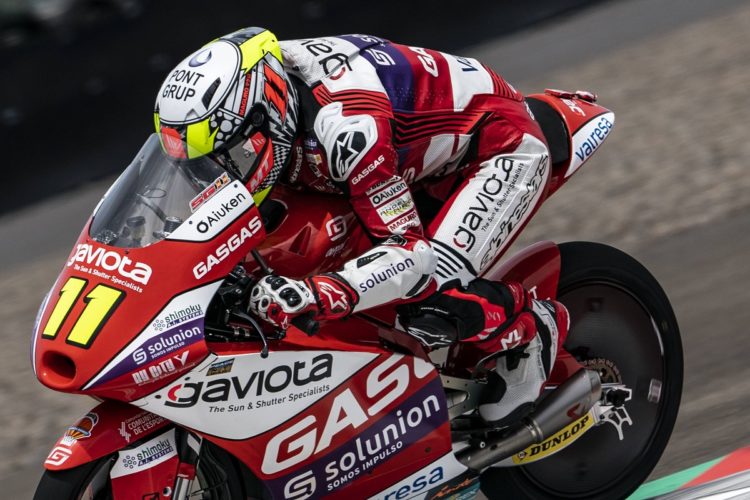 Sergio Garcia fought off a charging Jaume Masia across the final lap of the Portuguese Moto3 encounter to secure his second win of the year to take the points lead.

The GasGas rider looked set to ride off into the distance in the early laps as he pulled away from a struggling Deniz Oncu, Garcia managing to craft a handy 1.6 second lead by the time team-mate Izan Guevara managed to pass the Turkish ace for second.

Guevara had slightly stronger speed than Garcia once in clean air though and started to inch towards the Spaniard, eventually catching and passing him for the lead as the race passed mid-distance.

From this point onwards the leading group of five riders – the GasGas duo joined by Oncu, Masia and Ayumu Sasaki – tussled over the lead, though it was Garcia who entered Turn 1 at the start of the final tour ahead having scythed past Sasaki as they thundered across the start/finish line for the penultimate time.

Masia managed to follow through on his Ajo-run KTM with a bold move into Turn 1 and set about running the leader down across the final tour, and despite closing right up in the final sector he was powerless to prevent Garcia flying across the line to score his second win of 2022 by just 0.069s, Masia collecting second having fought back from a lowly 15th on the grid.

Sasaki managed to hold off Oncu for the final rostrum spot, while Guevara slipped back to fifth by the end.

Carlos Tatay meanwhile came out on top of a frenetic scrap for sixth on his CFMoto machine, the Prustel rider heading Andrea Migno and Brazilian rookie Diogo Moreira home.

Dennis Foggia – who led the points race heading into Portimao – struggled to make much progress in the contest after qualifying only 12th, the Leopard man claiming ninth ahead of Joel Kelso, the Aussie moving his way from 13th to complete the top ten on the final circulation.

Scott Ogden ran solidly within the top ten for the bulk of the outing, though the Visiontrack Honda pilot ultimately fell back to the rear of the second group to 13th by the end just behind Ricardo Rossi and Tatsuki Suzuki.

Front-row starter Mario Aji struggled to replicate the blinding speed he showed in the wet conditions once things dried out, the Indonesian falling to 16th by the time he took the chequered flag.

Garcia’s success sees him move into the lead of the Moto3 riders standings after four rounds by just two points over Foggia, while Masia moves into third overall 29 points from the series lead.