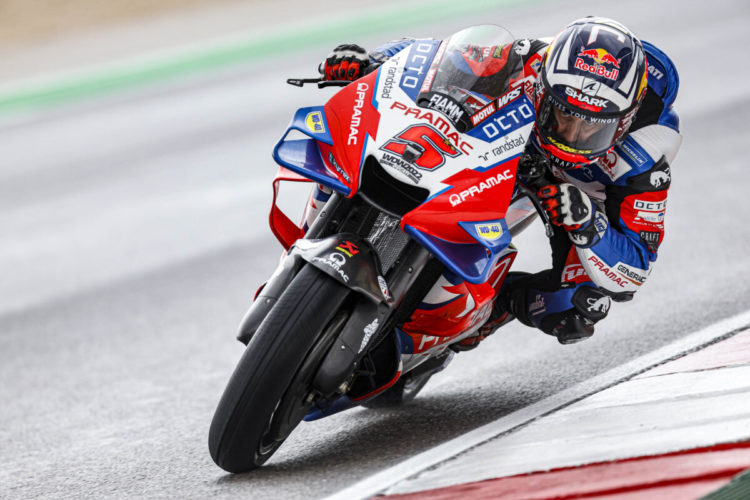 Johann Zarco made the best of the drying conditions in qualifying for the Portuguese Grand Prix to score his first pole position of the season, with Enea Bastianini down in 18th.

Zarco was one of half-a-dozen riders to take turns at the top of the times during the pole shootout as the Algarve International Circuit continually dried throughout the session after the showers that hit the venue throughout the early part of the weekend moved away prior to qualifying.

Alex Marquez looked to be the form man in the early part of the session having already experienced the conditions – the LCR Honda man having switched from wets to slicks towards the end of the opening qualifying segment – as he consistently managed to find chunks of laptime.

His pace began to wane in the face of some of his rivals in the closing minutes though, Jack Miller and Zarco swapping times before Suzuki’s Joan Mir came through to snatch provisional pole on his final effort.

As the last man on track though, Zarco had the best of the conditions and duly flew across the line to take back pole at the death – the Pramac man heading Mir by just 0.195s in the end.

Another late improvement was Aprilia’s Aleix Espargaro, the Spaniard having struggled in the wet throughout practice but finding confidence on slicks to storm onto the front row in third just ahead of Miller, while Fabio Quartararo lost out on a possible front row due to losing his best lap as a result of yellow flags being shown at the final corner for Pol Espargaro, who slid off his Honda.

Marco Bezzecchi was a stunning sixth for the VR46 outfit – scoring top rookie honours to boot – with Alex Marquez ending up seventh in the end just ahead of the second VR46 Ducati of Luca Marini, who joined Marquez in graduating from Q1.

Marc Marquez batted off his nasty FP3 high-side to take ninth – though this could have been even better had he not lost his best effort to the same yellow flag that cost Quartararo.

Pol completed the top ten despite his late crash, with the factory KTM duo of Miguel Oliveira and Brad Binder finishing off the 12-man Q2 line-up.

Jorge Martin narrowly missed out in a Q2 spot on his last gambit, leaving him 13th ahead of the second Aprilia of Maverick Vinales.

Championship leader Enea Bastianini suffered a horror session after failing to find speed having struggled during practice, though a late crash ultimately ended any hopes of reaching Q2 – the Gresini ace therefore having to make do with 18th for Sunday’s Portuguese GP.

Francesco Bagnaia suffered even more though after coming unstuck while trying to gamble on taking slicks early in the session, the Ducati pilot losing rear grip while navigating Turn 1 mid-way through the test having crossed some standing water and high-siding as a result.

A visibly uncomfortable Bagnaia was forced to head to the medical centre for checks rather than head back to the pits for another attempt, which means he will start from the back of the field in 25th should he make the race start.

Alex Rins was another to struggle in the tricky conditions, the two-time 2022 rostrum finisher ending up a distant 22nd after failing to string together a competitive tour in Q1.