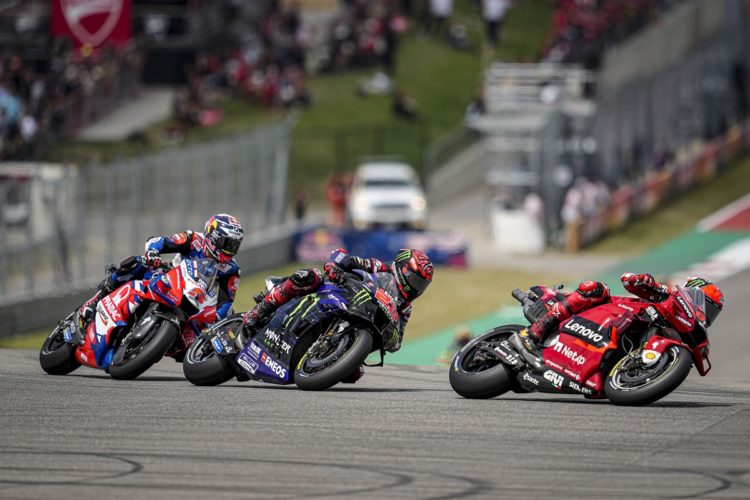 Fabio Quartararo says he is starting to “get used to” the engine power deficit he currently faces with his Yamaha M1 following a tough Circuit of the Americas outing.

The reigning MotoGP world champion looked to possess front-running performance throughout Friday and Saturday running for the Americas Grand Prix, the Frenchman ending the opening day third on the timesheets before topping Saturday morning’s FP3 test.

A costly crash in the pole shootout while looking good to at least challenge for a front row spot would limit him to sixth on the grid though, Quartararo dropping as far back as ninth in Sunday’s contest as he struggled to fight off the more powerful machines around him.

Having eventually crossed the line seventh – and pressuring Francesco Bagnaia and Marc Marquez heavily across the closing tours – Quartararo conceded that he was now having to “get used to” the lack of straight-line performance afforded to him, affirming that he fought for as many points as possible like “it was for the victory.”

“It is what it is, to be honest I gave my 100% all the time but unfortunately this was the best I could get today,” explained Quartararo.

“From the first races I’m getting a bit used to this deficit of power, it’s important to get used to it and today I fought with what I had and gave it all.

“Even if it’s P7 it’s more important than having nothing, and one that I can even say I’m happy (with) about the result but the race I had and how I fought like it was for the victory.”

Quartararo laid out the Spanish GP at Jerez early next month as the next “really good opportunity” for he and Yamaha to hit the very front again, the eight-time premier class race winner not overly confident his M1 will feature at the forefront of the action in next weekend’s Portuguese GP despite having taken victory at the venue last April in the first of two encounters held there last season.

“Portimao has quite a lot of acceleration (zones), last year in the second race there I couldn’t overtake (Jorge) Martin but Jerez will be a really good opportunity for us that we can’t afford to miss, so we will focus on these back-to-back races,” added Quartararo.

“I had many opportunities to see things on the bike (Honda) but when you ride with someone who is an eight-time world champion you can always learn, and today it was important to have this fight and take a good look at him.”