Miller ‘threw everything I had’ to deny Bastianini COTA spoils 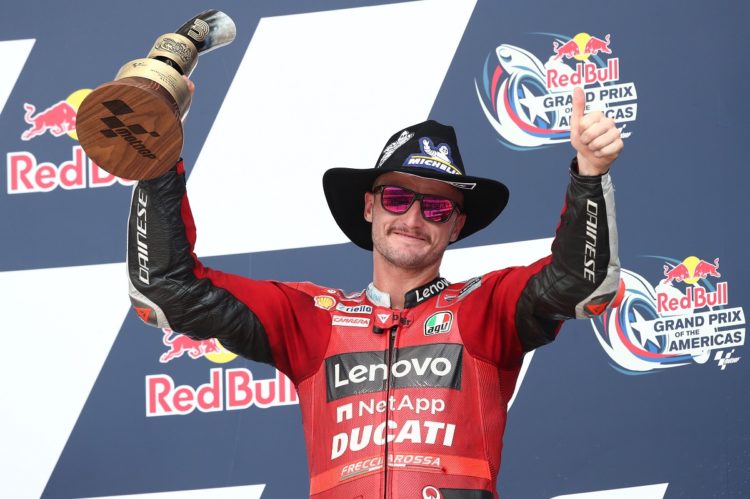 Jack Miller conceded he “threw everything I had” to try and score his first victory of the year in the Americas Grand Prix, though he ultimately fell to third.

The factory Ducati pilot made a rapid start to pass pole-man Jorge Martin for the lead as the field piled into Turn 1 for the first time, the Aussie going on to lead 16 of the 20 racing laps at the Circuit of the Americas before falling victim to a charging Enea Bastianini as he started to run out of tyre grip.

Miller lost further ground on the final lap of the encounter as he was out-foxed by Suzuki’s Alex Rins at Turn 19, leaving him to take the chequered flag in third and notch up his first podium result of the campaign – the first for either of Ducati’s factory entrants.

He admitted that while he was “disappointed” to lose out to Bastianini and Rins so close to the end of the contest, he was satisfied to at least secure a “needed” podium following a tricky opening three races of the season in which he only finished in the top ten on one occasion.

“It’s lovely to be on the box for the first time this year, I was thinking it was going to be a goldmine in the trophy cabinet today but it wasn’t to be,” explained Miller.

“I threw everything I had at it and pushed hard from the beginning, it was a lonely race there out in front trying to push along my lap-times.

“Then towards the end I started to struggle and Enea (Bastianini) came past, and then I made way too many mistakes getting sucked into the braking zones and things which cost me the second place, so I’m disappointed about that.

“Nevertheless we had a solid weekend and we needed that, more good points on the board and we’ll go into the European part of the campaign on reasonable terms and hopefully we’ll be able to kick things off.

“It seems I need to get put right to the bottom to get a kick in the arse (to get a result), last week was one of those ones that you want to forget and this one is one that you want to remember.

Miller also hailed the thrilling final lap tussle he enjoyed with Rins in which the pair swapped positions three times as they fought for the runners-up spot, the three-time MotoGP race winner describing the Spaniard as “clean and nice” in battle.

“It was great battling with Alex (Rins), we’ve been doing it for a while now and it’s always clean and nice to fight with him,” added Miller.

“It was a good scrap and I tried to ride as protective as I could but he fired it in, I struggled to turn in on the left-side of the tyre so I hoped I could square it off but as soon as I got on the gas it went sideways and it just didn’t happen, but he rode a fantastic race.”