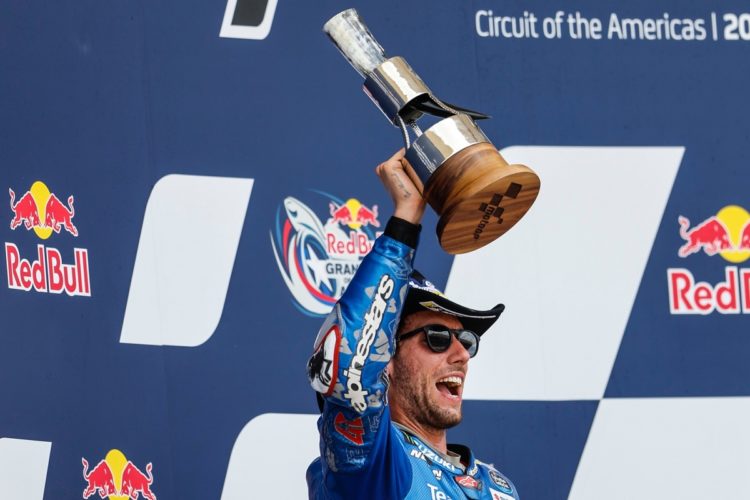 Having qualified seventh despite having had to use an extra set of tyres as a result of taking part in Q1, Rins dropped to eighth on the opening tour as he struggled for confidence with his GSX-RR.

Having passed Suzuki team-mate Joan Mir on the following lap, the three-time premier class victor managed to increase his performance throughout the opening segment of the encounter to work his way through the quintet of Ducati machines that locked out the front positions, eventually making it into the top three just past mid-distance.

Although unable to match eventual race winner Enea Bastianini, Rins was able to challenge and subsequently pass long-time leader Jack Miller for the runners-up spot on the final lap, scoring his second straight podium finish and moving to within five points of Bastianini in the points standings as a result.

Rins admitted post race that he “didn’t expect” to have enough to challenge for the rostrum at the venue he scored his maiden MotoGP race win at back in 2019 after suffering for speed in the early laps.

“I’m super happy with today, and sincerely I didn’t expect the podium because in the first laps I was struggling a bit and I lost some positions,” said Rins.

“Then lap by lap I was trying to push more the tyres and brake a little bit later to try and overtake the other riders, and then when I was third I had a couple of big front end moments in the first sector –where I was really fast and able to recover a lot of time – so I had to back off and make sure that I finished the race.

“Then in the last laps the pace was not so bad so I was able to arrive to Jack (Miller) and overtake him, so I’m really happy with this second position.

“I’m riding a little bit freer and the small advantage we have on the straight helps us to be a bit more relaxed during the race.

“I have worked a lot on the mental part and fitness part during the winter, and this has helped me to be more relaxed and consistent.

“We are only in the fourth race and there are many still to go, it’s good that we are only five points behind (championship lead) but we need to keep our feet on the ground and keep working forwards.”

Mir meanwhile managed to complete another strong day for Suzuki as he scored his best ever COTA result of fourth, a combined haul that has seen the Japanese manufacturer close to just two markers adrift of KTM in the battle for second in the constructors table, while it currently leads the teams standings by a commanding 33 points over KTM’s factory operation.

The 2020 MotoGP world champion says he is “happy” with fourth due to the COTA track not being “one of my favourites”, leaving him keen to get to Portugal in two weeks time as he looks to craft a title challenge across the European leg of the campaign.

“I’m happy to get my best result here in Austin, which is a track which is not one of my favourites,” added Mir.

“To finish fourth is great; we did a great race and are improving our performance with the bike and race by race am feeling more comfortable so we have to be satisfied.

“It’s a great race to go from less to more, we were strong and I hope to continue like this in Europe to make the next step.”