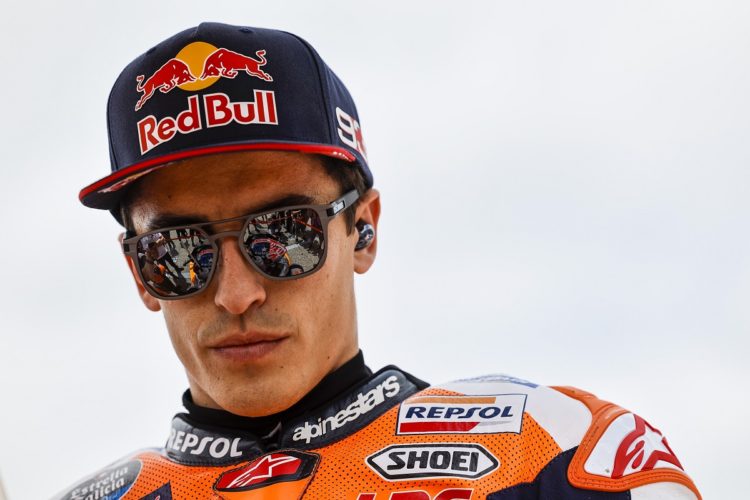 Marc Marquez reckons he could have fought for a first win of 2022 in the Americas Grand Prix had a technical issue not dropped him to last on the start.

Having started from ninth after struggling somewhat in qualifying, Marquez’s race simulations across the weekend held promise that he could fight for Honda’s first success of the year at the Circuit of the Americas, a venue the six-time premier class champion had won all but one event at since its inception in 2013.

A technical problem off the start though meant his RC213-V failed to escape his grid spot at normal speed, dropping him all the way to 24th and thus forcing him to fight through the field in his first race since the season curtain raiser in Qatar after missing the last two races due to a re-occurrence of diplopia.

Having recovered to the top ten just seven laps into the encounter, he eventually took the chequered flag sixth – just 6.6 seconds off the win – after holding off Fabio Quartararo in the closing stages after admitting he was “destroyed” due to having to “push to the maximum” following his early set-back, affirming that he reckoned he could have scored his eighth COTA win without the problem.

“I’m disappointed of course because the speed was there, I enjoyed it a lot coming from the back but 25 points were possible today,” explained Marquez.

“We had a technical problem on the start, there were already some messages on the screen before and then I started and something happened on the bike, then when I disengaged everything the bike started to work normally.

“From that point I was last and I started recovering many positions, I did a few mistakes but that is normal when overtaking so many riders, and I finished sixth so the speed was there.

“Overtaking other riders here is very hard, especially in the first laps because with the slipstream it is very difficult to stop the bike and at Turn 1 I tried to stop, but when I saw that it was not possible I found a small gap between (Takaaki) Nakagami and (Brad) Binder and released the brakes to not hit anybody.

“This was the scariest moment, but I also had a nasty one at Turn 10 as well as the battle with Fabio (Quartararo), but in the end I was destroyed because from the first lap I pushed to the maximum.”

Marquez was at least left satisfied with the fact he could head into the European leg of the campaign with “higher confidence” following his diplopia-enforced layoff, adding that he was looking forward to heading home and relax following some of the “most stressful” weeks of his career so far.

“When you start in front you can manage your physical condition and the tyres, but when you start last you have to give everything and with five laps to go I was finished,” continued Marquez.

“In Turn 1 and 2 I was losing a lot because I was very slow in the change of direction, but I managed to keep Fabio behind and I managed to get more confidence.

“Now I will go home to relax and breathe because this has been some of my most stressful last few weeks, we know that in Portimao a top five position can be nice but I won’t fix any target as we just need to find out what are level is at the moment.

“I leave here with higher confidence, which is the most important thing.”