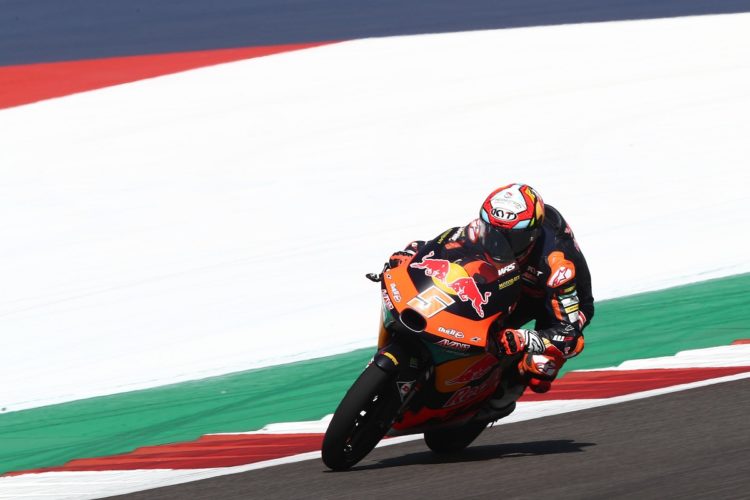 Jaume Masia came out on top of a thrilling five-way battle to score his first Moto3 race win of the year in the lightweight Americas Grand Prix.

Masia remained a fixture of the lead pack throughout the 17-lap contest at the Circuit of the Americas, the Ajo KTM racer sneaking his way through the pack alongside fellow experienced campaigners Andrea Migno and Dennis Foggia as the trio led the way heading into the final lap of the contest.

Migno managed to hold the advantage as the five-man lead group – also including Ayumu Sasaki and Deniz Oncu – exited Turn 1 for the final time, with Masia remaining close behind the Italian before drafting into the lead on the run to Turn 12.

Migno remained glued to the rear wheel of Masia as they navigated the final sequence of bends before attempting to fire down the inside into Turn 19, though the Snipers pilot overcooked his entry and ran wide as a result.

This allowed Masia back through into a lead he would never relinquish, leaving him to take the chequered flag 0.172s ahead of Foggia, who also managed to take advantage of Migno’s failed lead overtake.

Migno at least held on to complete the rostrum in third ahead of Saskai and Oncu, while Xavier Artigas took sixth after losing touch with the lead quintet across the final few circulations.

Izan Guevara salvaged seventh after having to serve a total of three long-lap penalties as a result of a jump start, while Carlos Tatay took eighth.

Ricardo Rossi and Tatsuki completed the top ten meanwhile as the duo took advantage of a late incident with Daniel Moreira, the Brazilian crashing out from sixth at the final turn on the penultimate lap.

Series leader Sergio Garcia failed to finish after getting involved in a clash with the other Ajo machine of Daniel Holgado, the GasGas rider initially remounting his steed before ultimately retiring after the points positions proved impossible to reach.