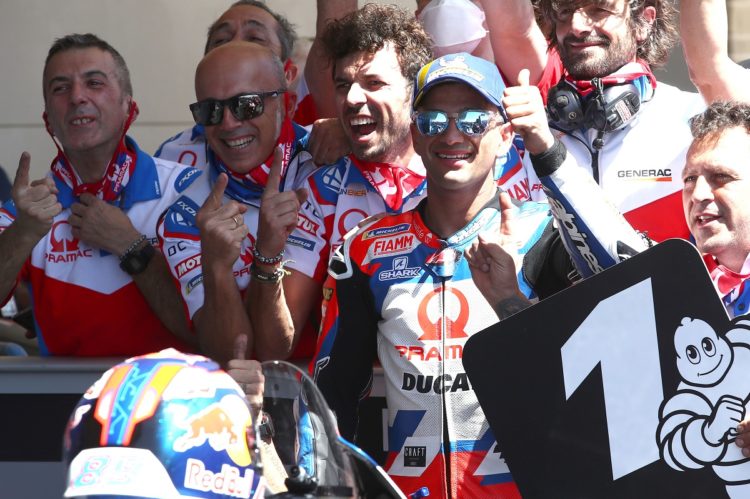 Jorge Martin revealed that a crucial setup change in FP4 that improved his Ducati’s feeling under braking was the key to turning his Americas Grand Prix weekend around.

Martin came into qualifying on the back foot having to partake in Q1 due to managing a lowly 15th in Saturday morning’s FP3 outing after suffering with a “really bad” feeling with his Pramac-run Desmosedici, though a change made to help him feel the front end of his machine under breaking in FP4 allowed him to escape the opening Q1 session comfortably.

Having posted the third fastest time in the early part of the pole shootout, Martin then posted an all-new two-wheeled lap record of the Circuit of the Americas on his final attempt to score his sixth career MotoGP pole, as well as his second of 2022.

The one-time premier class race winner explained that a change made to his Ducati in FP4 was the key ingredient to his sudden pace increase, leaving him “super happy” after what he described as a “difficult day.”

“I’m super happy with the lap, it was a difficult day for me because in FP3 I was feeling really bad,” explained Martin.

“I owe it to my team because they did an unbelievable job after I crashed in FP3 because I lost some confidence into the fast corners, but we made some changes in FP4, and here even small changes can make a big improvement because there are so many corners, so this makes up a lot of time.

“I changed something on the bike that helped with braking, especially with the front and I feel that my experience over the past couple years is now helping me know where to improve as well as my team, it will be a difficult race so I hope this improvement will help me.

“I didn’t expect to go to Q2 but in Q1 I did an amazing lap alone, so after that I thought I could do a good job in Q2, but pole position is unbelievable.”

Martin added that he reckoned the bulk of the top ten could have the speed to fight for victory in the Americas GP, but that he would “prefer to fight with Ducati’s” if he was wasn’t able to escape out in front.

“I feel great (about tomorrow) but I would prefer to fight with Ducati’s because the tyres will be used in the same way, and the overall bike is the same, but I feel that Fabio (Quartararo), Marc (Marquez) and the Suzuki’s will be super strong,” continued Martin.

“You always have to believe until the end, and tomorrow will be similar because we just need to get a good start and try until the end because everything is really open and a lot of riders can win, so I hope to be one of them.

“The race will be really hot, and it looks like it’ll be windy, I feel great enough to fight, maybe not for the win, but for the podium and I’ll try my best.”