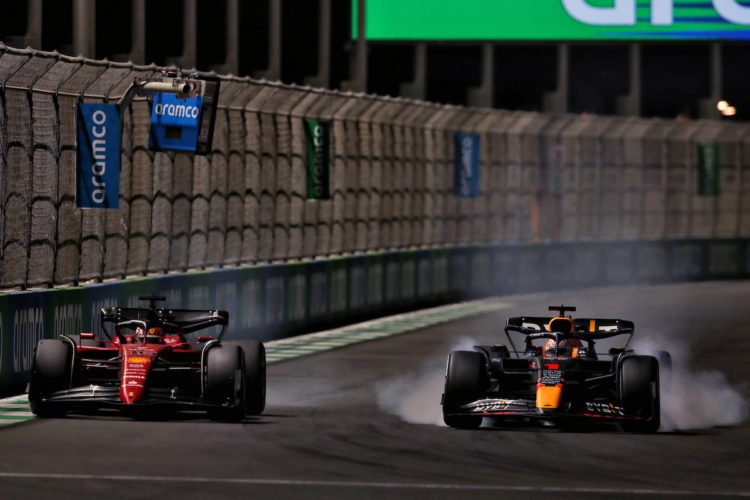 At last weekend’s Saudi Arabian Grand Prix, DRS proved to be a powerful tool in the on-track battles, continuing the trend from Bahrain.

At one point during the late tussle for the lead last Sunday, Max Verstappen and Charles Leclerc both braked early into the final corner as they looked to obtain DRS by being the car behind.

Both drivers commented on its effectiveness, with Leclerc stating that F1 is currently ”better off” with it in place, despite calls from some to return to ”natural” racing.

Horner has suggested that the sport should look to move its detection points as a method to stop drivers from purposely slowing to gain an advantage.

“The DRS is so powerful you could see there was a game of cat and mouse between the drivers, where they’d brake to a point that they accelerated to the corner,” Horner said.

“Maybe we should look at where that DRS detection zone is for future years as you definitely want to avoid being in that situation.”

Verstappen won the race over Leclerc, overtaking the Monegasque driver to open his 2022 winning account, as he looks to defend his title this year.

The result marked a positive turnaround for Red Bull, who walked away from Bahrain with zero points after both cars suffered late-race retirements.

“It was great to rebound after the issues we had and what a great race,” Horner said.

“It was a very strategic race for Max, not taking too much out of the tyres to make sure he had enough to attack at the end.

“And [there was] some great racing between him and Charles, thankfully he had enough to hang on at the end.”