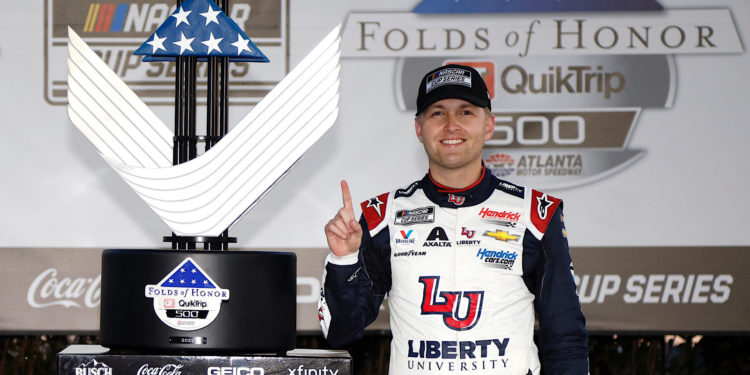 William Byron won the Folds of Honor QuikTrip 500 at the repaved and newly reconfigured Atlanta Motor Speedway. Byron’s third-career win made him the fifth different winner through the first five races of the 2022 NASCAR Cup Series season, the third from Hendrick Motorsports, joining teammates Kyle Larson and Alex Bowman.

“It was so different. You know, honestly, the last few laps there, just trying to manage the gap to Bubba [Wallace] and trying to not get too far out front,” Byron said. “My spotter Brandon [Lines], it’s his first win so congrats to him and just thanks to this whole team. They’ve done a great job this year. There’s a lot of changes with the Next Gen car. The Liberty University Chevrolet was awesome there. We had a pretty rough practice; worked hard on it and got it handling well. Like I told you, it was kind of an intermediate style with a little bit of superspeedway to it, so it was lot of fun. Thanks to everyone at Hendrick Motorsports. Super exciting.”

The track’s reconfiguration led to a superspeedway style of racing, and with that came the implementation of superspeedway racing rules, including an out-of-bounds line at the bottom of the race track. Christopher Bell was second to Byron at the checkered flag as several other cars wrecked. But Bell had taken that position by going below the line to pass Ross Chastain. The move resulted in a penalty that sent Bell to the end of the lead lap and Chastain to a second-place finish.

“We did exactly what we set out to do today,” LaJoie said. “We made Atlanta Motor Speedway like a superspeedway. We missed the wrecks and put our #7 Fraternal Order of Eagles Camaro ZL1, there, at the end and got a top-five finish. It’s great to start our season with three top-15s  and, now, one top-five. Hopefully, we can maintain the momentum over the next couple of weeks and put ourselves in a good points position through the summer. Thank you to everyone at Spire Motorsports and the #7 team for all the hard work to continue to build fast Chevy’s.”

The new style of racing at Atlanta also produced track records in lead changes and different leaders. Twenty drivers, more than half the entrants, contributed to a tally of 45 lead changes. Even so, Byron managed to lead over a third of the 325-lap race, running up front for 111 laps. The next-highest laps-led tally was the 42 laps led by Chastain.

“It’s so cool. I think these fans saw one heck of a race,” Byron said. “It was certainly long from my seat. It was mentally taxing. Just thanks to all the fans for coming out. Been an awesome weekend. I got the win last night in the Late Model, too, so it’s been a lot of fun.”

Byron led most of the remainder of the race after taking a lead on lap 262. Darrell “Bubba” Wallace Jr. got ahead of Byron for the lead, with a push from Ryan Blaney, on a restart with 12 laps remaining. But two laps later, Byron retook the lead.

Wallace remained in contention in the closing laps but was among the drivers wrecked on the final lap. He wound up with a 13th-place finish.

The yellow flag waved 11 times throughout the race, and both of the 110-lap stages ended under caution. Byron won the first stage after Chastain led 42 laps of the stage. Chastain was the race leader when he hit the wall with a flat tire on lap 95. Matters got worse for Chastain when he was penalized two laps for improper fueling. He eventually got back on the lead lap with free passes during two later cautions.

“That’s the fight; that’s the fight in Trackhouse,” Chastain said. “This Gen 7 car, to take a lick like that, blow a tire out of nowhere, leading. Just cruising, blow a right-rear, slam the wall. I thought our day was over. Our guys went underneath the car, got the tow closer, and we got the balance back where I could drive it, and this Advent Health Chevy was fast. It was so fast. I mean, we were fighting with William, there, at the beginning. So cool to race with buddies again. I only have a few, but the last two weeks I’ve been able to race with buddies. Can’t thank everybody at Trackhouse, the Moose, Advent Health, everybody that’s been on this car. Justin Marks and his family for what they do for me and Daniel Suarez. What a teammate to push me, there, at the end.”

Blaney won stage two at lap 210 after inheriting the lead when Ricky Stenhouse Jr. spun from the top spot because of a flat tire on 201. The race restarted late in the stage but the yellow was displayed again a lap shy of the end of the stage when Larson wrecked while racing HMS teammate Chase Elliott and collecting Denny Hamlin in the process.

“We were just coming to the end of the stage. He [Hamlin] was just trying to help me get a run down the front stretch. He just got to me in the corner and got me loose,” Larson said. “I hate that happened, but it’s a product of this racing and product of pushing; trying to draft and get your lane going. Nothing is intentional. Obviously, I wish we were still out there and both of us racing. The good thing is we have a win already. Two DNF’s in a row isn’t what we want, but our #5 HendrickCars.com Chevy is fast. We were able to drive to the front a few different times and avoid a couple different wrecks. I was happy with the car. The handling was off early, but we got it better. I know the speed was there to contend. We’ll move along and go have some fun on a road course.”

The incident resulted in Hamlin’s premature exit of the race. He was one of two Joe Gibbs Racing drivers to exit the race early, as Kyle Busch also left the race early after involvement in multiple on-track incidents. 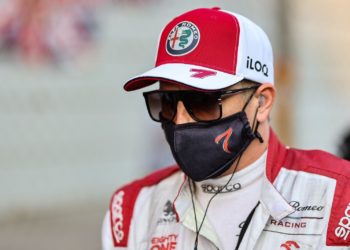 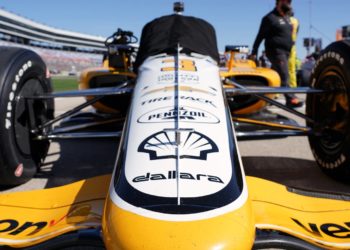 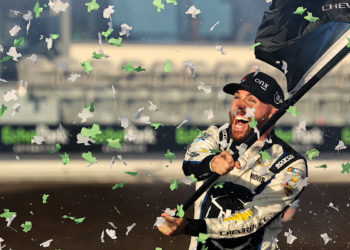