Magnussen ‘can’t even believe’ run to P5 in Bahrain 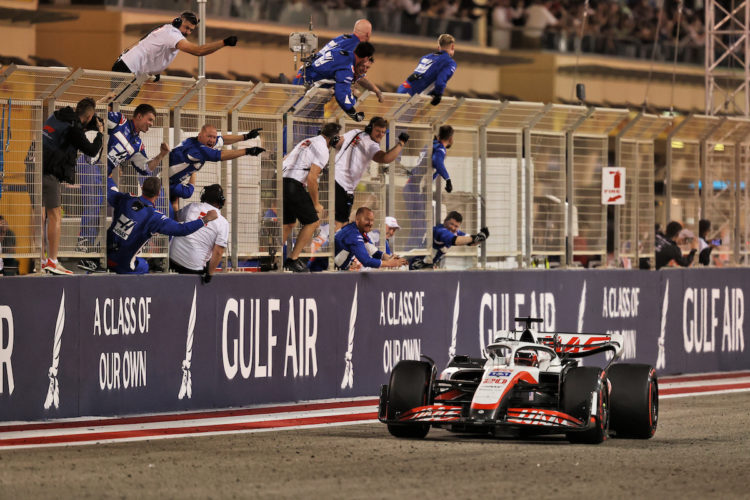 Kevin Magnussen says that he ”can’t even believe” Haas’ display at the Bahrain Grand Prix, which saw him take fifth place.

The position marks Haas’ best race result in almost three years, with the team now sitting third in the Constructors’ Championship after the opening round.

The American squad spent the entire 2021 campaign struggling at the back of the field as it focused its resources on its 2022 challenger.

On Saturday in Bahrain, its improvement in pace was realised when Magnussen qualified in seventh place.

The Dane made a strong start on Sunday, progressing up to fifth place past Red Bull’s Sergio Perez, and he would only lose out to Perez and Mercedes’ George Russell later in the race.

“This craziness just continues,” Magnussen said. “I don’t know, man. We had a really good race.

“The car was good all the way through, we had a little more degradation than we hoped for on the first set.

“But I also got past a few people that were faster than me on the first lap. I didn’t know whether to try and keep them behind or let them go.

“I also locked up a little bit so that first stint maybe wasn’t perfect, but then from there, even though we pitted earlier than we planned, we extended that second stint on the same tyre to get back on plan.

“Then [we] had a Safety Car at the end that put everyone on the same tyre. Just a sprint race to the end, which was intense.”

Magnussen was on course to finish in seventh place before both Red Bull cars retired in the dying stages of the grand prix.

“Obviously a bit of luck there at the end with the two Red Bulls, but we’ll take that,” Magnussen commented.

“I don’t think we could’ve scored any more points. We maximised the points we could’ve got and even more with the luck we had with the Red Bulls.

“Qualifying could’ve been better but we made it to the end of the race, we got P5. I can’t even believe it. I can’t wait for the rest, I just want to keep going.”