Marquez: ‘The race was too fast’ 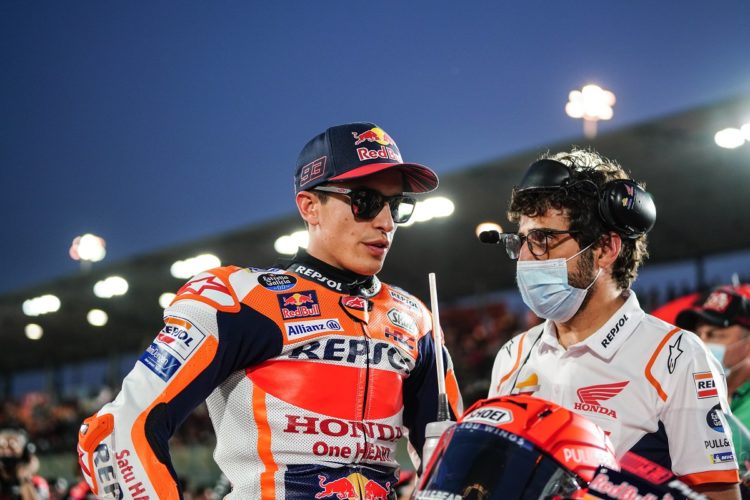 Honda’s Marc Marquez has conceded that the pace set by the leaders in the Qatar Grand Prix was “too fast” for him to fight for a rostrum result.

The six-time premier class champion made his first MotoGP race start since winning the Emilia Romagna GP last October after missing the final two outings of 2021 due to aggravating an old eye injury shortly after the contest, though he struggled to extract as much speed from Honda’s all-new RC213-V as team-mate Pol Espargaro in race conditions.

He ran within the podium places across the early stages of the encounter as Espargaro led the way, Marquez eventually dropping back to fifth by the time the chequered flag was shown while his team-mate would end up third after making a costly mistake while battling for the lead with eventual winner Enea Bastianini.

Marquez admitted that the speed put on display by the rostrum runners was “too fast” for him to deal with, the Spaniard electing to think of the bigger picture and bring his machine home to bag the solid points on offer for fifth.

“The race was too fast, the pace was amazing and they (front runners) rode in a very good way, especially (Brad) Binder, Enea (Bastianini) and Pol Espargaro, they were very fast and I did my maximum but I didn’t have enough speed and was slower than them,” said Marquez.

“I tried to manage and play with all the things like torque, fuel and other parameters but today was not our day.

“I had a few warnings because I was struggling particularly with the front tyre, so I told myself to keep calm and that a top five was a good start to the season, but of course we need to keep working.”

Marquez added that the increased competitiveness of Espargaro as a result of the new, more rider-friendly RC213-V was “good news for the team”, as well as that he would continue to compete with the rider’s title in mind across the next races.

“It’s good news for the team (Pol Espargaro running at the front) but for me no of course, but it’s true that my team-mate Pol has been very fast in the pre-season but he was also very fast last year in the Qatar race and this year he was riding in a very good way,” continued Marquez.

“In Mandalika also he’ll be one of the contenders so I need to have passion in these first races because sometimes you can lose the championship in the first two or three races.

“If you win the first race the others may need to be worried, but if I finish fifth it’s not because I want to be there it’s because I don’t have more so we need to find a way to improve, but of course we are thinking about the championship and we will see how we do in Mandalika and Argentina.”