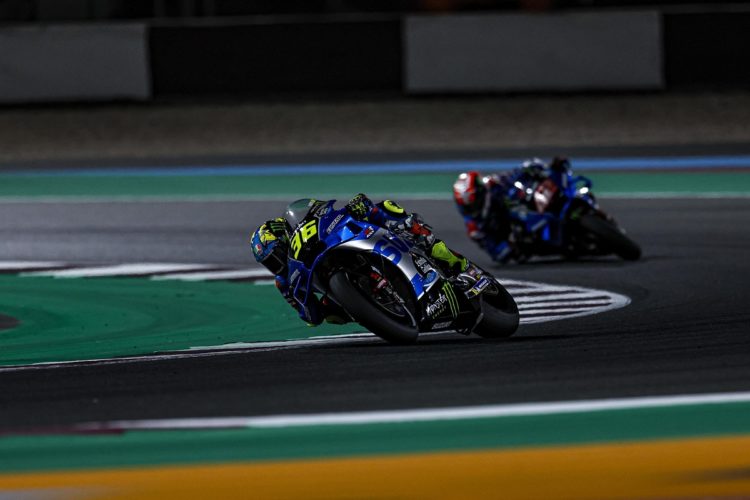 Suzuki riders Joan Mir and Alex Rins “expected more” from the opening MotoGP race of the year in Qatar, the duo struggling with the balance of their GSX-RR’s.

The Japanese brand looked to have made a major step forward throughout testing after increasing the power of its prototype, the gains it had made borne out by impressive speed trap figures at the Lusail International Circuit all weekend that saw its riders frequently featuring towards the top.

A strong race run by Mir in particular on Friday laid out Suzuki as potential favourites for the race win, though despite launching from seventh on the grid to fourth in the early laps the 2020 MotoGP world champion’s victory bid never really got going as he eventually faded to sixth as he took the chequered flag.

Mir was left “disappointed” with his lack of race pace following a promising earlier portion of the event, the Spaniard revealing he struggled with rear grip – though he was left feeling positive regarding his machine’s improved straight-line performance.

“I’m disappointed because I expected more from this race, and think the team did too,” explained Mir.

“My start was really good and I was able to make good manoeuvres but in the middle of the race I started to have trouble with the rear, I don’t know why but I didn’t have good grip to move forwards and do the last part of the race with good consistency.

“I gave my 100% so I can’t ask for more, I’m happy because I could fight on the straight but honestly we need to make another step on the chassis area, working on the setting to try and find something extra.”

Team-mate Rins meanwhile also struggled with the handling of his bike, though unlike Mir the three-time premier class race winner had problems with the front of his GSX-RR, leading him to back off and bag the points for seventh in an attempt to take a more championship-orientated approach to his racing this year after a horror 2021 term that saw him crash six times en-route to 13th in the rider’s standings.

“I was struggling unbelievably a lot with the front of the bike, I don’t know why but I was losing the front and when I was riding I was telling myself to not do like last year and crash, I tried to manage the distance to the riders behind and finish the race,” said Rins.

“These nine points are very important in this long championship, the positive thing is that the engine helped us to be a little bit calmer and manage the race better.

“We need to work on qualifying still, we improved a little bit compared to last year but not much, but hopefully we can find something for Mandalika as its key to start at the front of the grid to do a good race.”