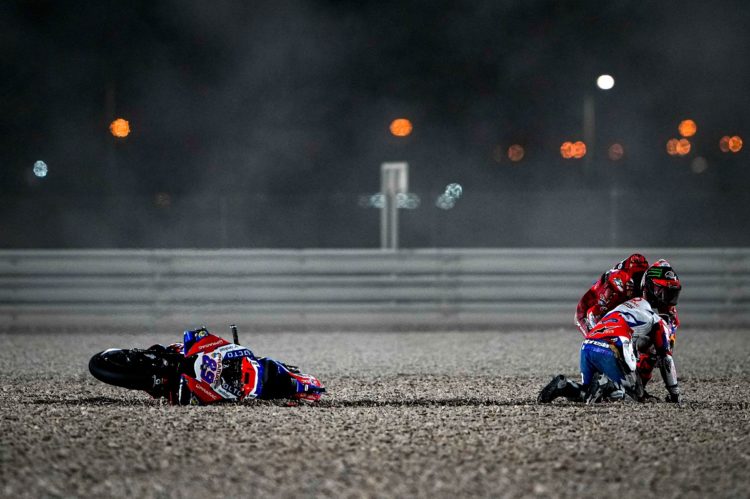 Francesco Bagnaia has apologised to his Ducati team after he crashed out from the Qatar Grand Prix, taking out fellow Desmosedici rider and pole-man Jorge Martin in the process.

The Italian struggled for outright pace across the Qatar weekend following an ultra-strong end to the 2021 campaign – including four wins in the final six contests – and pre-season, qualifying only ninth before a poor start dropped him to 15th at the start of the Lusail International Circuit sprint.

Bagnaia showed decent speed as he carved his way back into the top ten just a few laps later, before starting to put pressure on Pramac GP22 pilot Martin, who had also made a sluggish start from the head of the field to drop to eighth.

The ’21 vice-champion attempted to pass Martin as the race hit mid-distance with a move into Turn 1, though disaster soon struck as he tucked the front of his machine into the bend – clearing both himself as well as an innocent Martin into the gravel and subsequent retirement.

A frustrated Bagnaia swiftly apologised to Ducati for taking two of its GP22 machines out of contention, reckoning that a lack of acceleration from the final corner was making it trickier than anticipated to make passes.

“I was trying to recover from the bad start and I was trying to overtake other riders but I was not so fast exiting from the last corner, I was losing a lot of acceleration there every time and tried to pass Jorge (Martin) in the last part of the braking (zone),” explained Bagnaia.

“I wasn’t super late on the brakes but I lost the front, so I’m sorry to Ducati and to Jorge as it was my fault.”

Bagnaia added that having to “work too much on my bike” throughout practice to find a comfortable set-up made his Qatar GP event harder than expected, the 2018 Moto2 world champion reckoning a “top six or seven” was as much as he could have realistically achieved.

“We can only be disappointed about this weekend as we were having to work too much on my bike, this morning I was trying different things to adapt better the bike to the track but 20 minutes was not enough so I was not ready for the race,” continued Bagnaia.

“I tried but my start was very bad, but I saw that all the new Ducati’s started not so well so this is something we have to improve and understand why this was the case.

“After that I started to overtake riders but I was too far behind and the front group was pushing hard so it was difficult for me (to make progress), I think the maximum for me was a top six or seven but I crashed.”