Binder: “I’d say you were lying” if told Qatar rostrum was possible for KTM 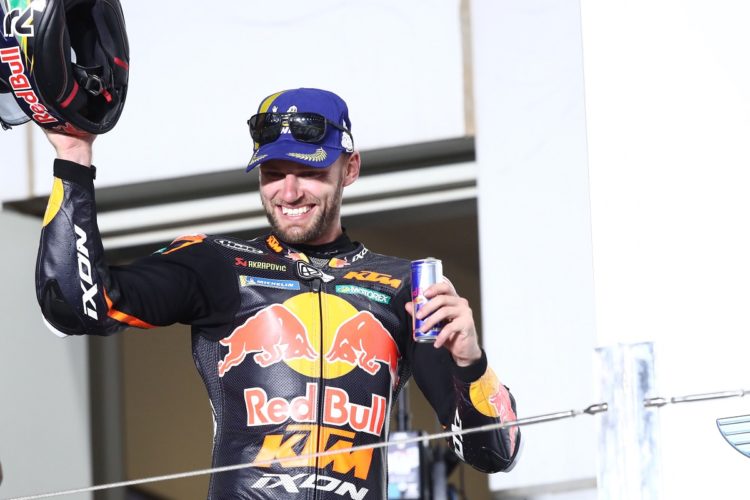 Brad Binder says he wouldn’t have believed a rostrum at the Lusail International Circuit was possible for KTM prior to this weekend due to the venue being its “bogey track.”

KTM as a whole had a relatively underwhelming start to the weekend after struggling to breach the top ten on Friday, with Binder’s run to seventh in qualifying at that point looking to be the maximum possible for the Austrian brands RC16.

The South African’s “perfect” getaway allowed him to instantly move up to third before later taking advantage of a mistake from Honda’s Marc Marquez to take second, a spot he would maintain until eventual race winner Enea Bastianini passed him with ten circulations remaining.

He looked good to secure an unlikely third as the contest wound down before a mistake from Pol Espargaro elevated him to second, while a late race charge saw him close to within 0.346s of Bastianini by the end-though he admitted post-race that “if you told me last year we’d be on the podium here I’d say you were lying.”

“The start was insane, I know that I’ve been getting good starts from last year but tonight’s was a little bit extra because when I was shifting through the gears and starting to overtake the row in front of me I thought “that was perfect,” said Binder.

“To slot into third at Turn 1 was ideal and I was able to stay calm and try and follow the boys out front so I think today was one of the cleanest races I have ever done in MotoGP, and normally Qatar is a bogey track for us so if you told me last year we’d be on the podium here I’d say you were lying.

“I found out tonight that we are a bit too cautious and low on the traction control in some places so I couldn’t get the drive I needed, but you can’t change that in the race so I wish I’d figured that out earlier.”

The two-time premier class race winner reckons that KTM still has a good amount of untapped potential within its RC16, declaring that he believes he has what it takes to “run with the top boys week in and week out” going forwards.

“There are a couple areas we can improve, I have an amazing team behind me and to start this way is incredible so we just have to keep working and our package is still new, so we still have some way to go,” added Binder.

“I really do believe we have what it takes to run with the top boys week in and week out, our bike is working incredibly well and more than anything I’m very confident with the front end and I know there are things we can improve with the rear, and when we do it’s going to give us a really strong package.”