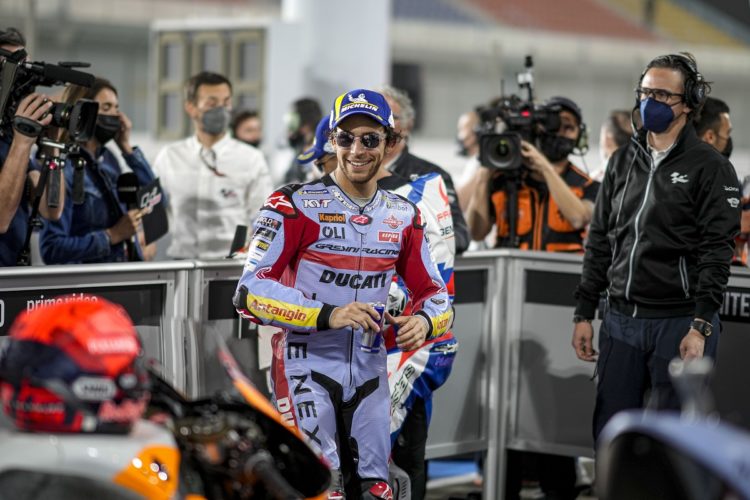 Enea Bastianini has set his sights on scoring a first ever MotoGP victory after qualifying a career-best second for the Qatar Grand Prix, though expected a “very hard” challenge.

The Gresini rider showed impressive speed throughout practice at the Losail International Circuit before later challenging Jorge Martin for pole in qualifying, the Italian coming just 0.147s from denying the Pramac rider the accolade.

His achievement was especially impressive considering his Gresini squad is embarking in its first event running as an independent team since 2014 after splitting with Aprilia at the end of last year, the team running a pair of Ducati’s this year having run customer Honda’s prior to its stint with the Italian brand.

He credited his run in FP3 to break into the combined top ten times and earn a passage directly into the pole shootout as a help towards grabbing his first ever front row starting spot, admitting he is keen to see what can be achieved “starting from the front and not at the rear.”

“I pushed very hard this morning to be in Q2 and at the end I’m here with my first front row in MotoGP,” said Bastianini.

“I’m very happy as we’ve worked very hard over the winter to be here now because last year qualifying was always so difficult, but with this 2021 bike (2021 Ducati Desmosedici) it’s easier to ride on the limit.

“I think tomorrow will be a very hard race because there are ten riders that are very close, so we will see what happens as it is the first time and starting from the front and not at the rear.”

Bastianini went on to hail the step forward in confidence and feel he has found with his new GP21 machine, the 2020 Moto2 world champion having had to make do with a two-year old Ducati GP19 in his rookie campaign last season, explaining that the newer bike’s smoother throttle response is making matters “easier”, particularly in qualifying trim.

“The biggest step for me is staying on the bike because it’s much easier to ride (than Ducati GP19) but also the throttle is more smooth, so it’s easier when I open the throttle compared to the ’19 because I used to get a lot of movement on the rear – especially on the soft tyre – during qualifying, but it also helps that I am more experienced now (than last year.),” continued Bastianini.

“I don’t know if we can win, it’s possible and I will try but we are all very close, especially with Marc (Marquez) and Jorge (Martin), but I want to win!”