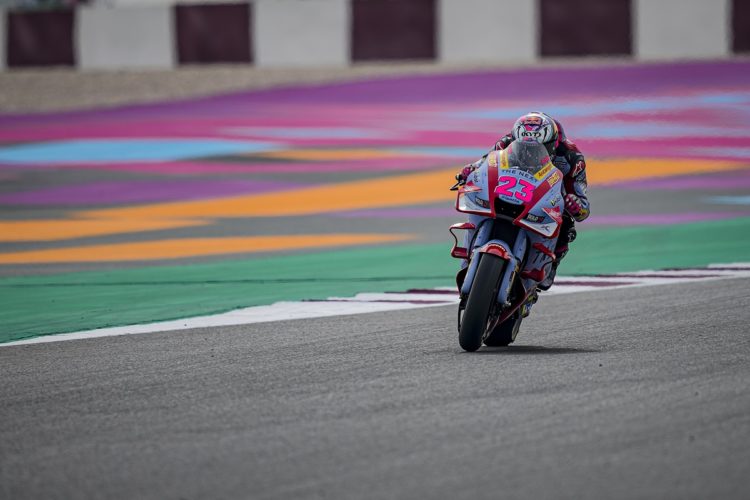 Enea Bastianini led the way in third practice for the Qatar Grand Prix as reigning MotoGP world champion Fabio Quartararo missed the top ten and will have to contest Q1.

With hotter conditions expected in the daylight hours in which FP3 was held, times were expected to remain unbeaten from Friday evening’s FP2 test, though ultimately improvements were found as the bulk of the 24 riders headed out towards the end of the session to try and manage a top ten position and a direct pole shootout berth as a result.

Bastianini kicked off the final flurry of times as he fired in the fastest lap of the weekend – a 1:53.382s – though he would swiftly be demoted once again having exceeded track limits at the final bend, before then losing his subsequent lap due to traffic.

In the meantime Francesco Bagnaia had managed to lift himself from the danger zone after sitting tenth overnight, the Ducati man firing in the sixth best combined time with a few minutes remaining to put Honda’s Pol Espargaro and Quartararo on the cut line.

Espargaro managed to find enough of an improvement to go fastest in FP3 and fifth overall with just seconds to spare, though he was soon bumped back to second by a relentless Bastianini who managed to claim the session honours as well as the fifth best combined effort despite having posted his last gambit on the third lap of his run.

The direct knock-on effect of this was the elimation of Quartararo who failed to improve on his Friday time in the closing stages, leaving the Frenchman 11th overall and therefore forced to take part in the opening segment of qualifying on Saturday evening to try and secure one of the final two spots in the pole shootout.

His best lap in FP3 still left him fourth in the session just behind Bagnaia, with KTM’s Brad Binder ending up in fifth.

Alex Rins’ best Friday time was enough to leave him atop the combined standings heading into qualifying in front of Marc Marquez and Suzuki team-mate Joan Mir, with Pramac Ducati’s Jorge Martin and Bastianini completing the top five.

Pol and the second factory Yamaha of Franco Morbidelli followed up next ahead of Bagnaia who was shuffled to eighth overall in the final combined reckoning, with fellow Ducati man Jack Miller and Aprilia’s Aleix Espargaro grabbing the final direct-to-Q2 passages.

Johann Zarco’s tricky weekend continued as he managed only 15th overall ahead of RNF Yamaha’s Andrea Dovizioso, with LCR Honda’s Alex Marquez and the other Aprilia of Maverick Vinales in 17th and 18th respectively.

Raul Fernandez was fastest rookie on his Tech 3 KTM meanwhile in 20th overall, the five rookies completing a field covered by just under two seconds.