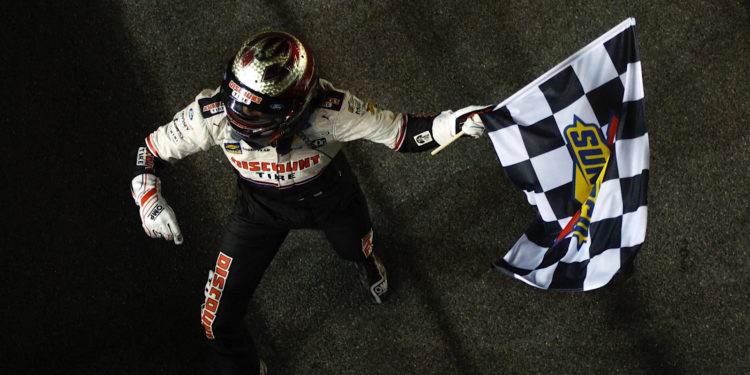 For team owner Roger Penske’s birthday, one of his drivers, Austin Cindric, presented the gift of a Daytona 500 win Sunday. Cindric’s first-career NASCAR Cup Series win kicks off the drivers first full-time Cup Series season and comes in his eighth-career start in the series.

“Oh, my God. Do you know what makes it all better? A packed house. A packed house at the Daytona 500,” Cindric said. “Oh, my God. I’ve got so many people to thank. First and foremost, Roger Penske, happy birthday. Oh, my gosh. Appreciate Ryan [Blaney] being a great teammate. Obviously, he wants to win this one, but I’m so pumped for Discount Tire, Menards, Ford. Everybody works so hard with this Next Gen car, through this whole process, and damn, I am so excited.

Darrell “Bubba” Wallace Jr. notched his second Daytona 500 runner-up finished, and the Toyota driver was the only driver from outside the Ford camp at the checkered flag. Chase Briscoe finished third, Ryan Blaney was fourth and Aric Almirola rounded out the top-five.

“Yeah, first of all, that’s pretty damn cool to win the 500 in, I think, the first attempt, maybe not — but [first] full season for him, so congrats to Austin,” Wallace said. “What could have been, right? Man, need to talk about some happy stuff, here. Just dejected, but the thing that keeps me up is just the hard work that we put into our speedway stuff and the hard work from everybody at 23XI, proud of them, can’t thank them enough. I knew this was a big move last year for me to go out and be competitive, and we’re showing that. It’s always the first race of the season and you’re getting through everything, but when you come out of the gates like that, it’s empowering, it’s encouraging. So thanks, everybody, back at the shop, McDonald’s, almost got them another one — back-to-back superspeedway wins. That would have been awesome, especially with it being the 500. But just short. I thought our Toyota teammates did good work until they got picked off one, two, three throughout the race, so we just had to survive. Great Speedweeks, though. We’ll come home second. I’m going to be pissed off about this one for a while. I was happy on the first second place we got a couple years ago. This one sucks when you’re that close, but all-in-all, happy for our team, happy for our partners, and on to California.”

Brad Keselowski led early in the final 70-lap stage before a multi-car crash involving Joey Logano, Martin Truex Jr., Kurt Busch and Tyler Reddick resulted in the fifth caution of the race with about 50 laps remaining in the race that was scheduled for 200 laps but extended a lap by an overtime restart.

Keselowski gave up that lead to pit during the caution, and Cindric restarted with the top position. Cindric and Wallace traded the lead back-and-forth before Ricky Stenhouse Jr. took the position on lap 178.

Cindric retook the lead with seven laps remaining, just before the final caution for a wreck involving Stenhouse and Chris Buscher.

“I’m surrounded by great people. That’s all there is to it,” Cindric said. “I know there’s going to be highs and lows, being a rookie in a field of drivers this strong. I’m just grateful for the opportunity, excited to climb the mountain we’ve got ahead of us on the 2 team. “But we’re in the playoffs. That’s one good box checked. My gosh, what an awesome group of fans, what an awesome race car. Just really thankful.”

“I’m fine. I’ve hit a lot harder before, that’s for sure,” Burton said. “It’s just unfortunate. I hate it for the Wood Brothers group. They brought a really fast Ford Mustang down here and ended up on our lid, so that’s never good. I’d like to look back and see what happened. I don’t know, I just got pushed and didn’t take it the right way – the car didn’t take it the right way or got pushed in the wrong spot. I’m not sure.  I couldn’t really tell. I was looking out front to see what I had to do next to side draft the next guy that was on me, so just a bummer. I don’t really know what we could have done different, but we’ll move on and get better from it.”

The yellow flag was the third of the race. Truex had taken the lead from Burton on lap 62, just a few laps after the restart from the second caution that came on lap 52 when Justin Haley suffered a broken wheel after a lost tire.

Busch first took a brief lead from Keselowski on lap eight. Keselowski had led from the opening lap when he took the top spot from a second row starting position. He retook the lead from Busch on lap nine.

With Keselowski leading an outside line of cars and Busch leading the inside line, the two drivers traded the front position back-and-forth after lap 28 until Busch took command of the position on lap 33. By that time, Keselowski had led 26 laps.

After a green-flag cycle of pit stops that began with most of the Fords on lap 38,  Logano was the leader with Busch in second. Logano, who started in the back in a backup car, lost the lead to Busch by the time the yellow flag waved for the first time on lap 41 when Kaz Grala lost a wheel and Briscoe spun.

Truex also won the second stage by inching ahead of Logano first n the final feet of the stage that ran caution-free and ended on lap 130.

Blaney and Keselowski dominated the second stage. After Erik Jones got off pit road first during the caution between the first two stages, Blaney took the lead on the lap-72 restart. Blaney still was the leader ahead of mid-stage green-flag pit stops, but when the cycle completed on lap 110, Keselowski was up front.

Keselowski continued to lead until the final lap of the stage.

“I thought down the backstretch we were gonna win the race and just the 12 [Blaney]and the 2 [Cindric] got a really good push from the 23 [Wallace] and basically cleared our lane and then our lane kind of broke up there at the end.  It was really close, just green-white-checkers.”