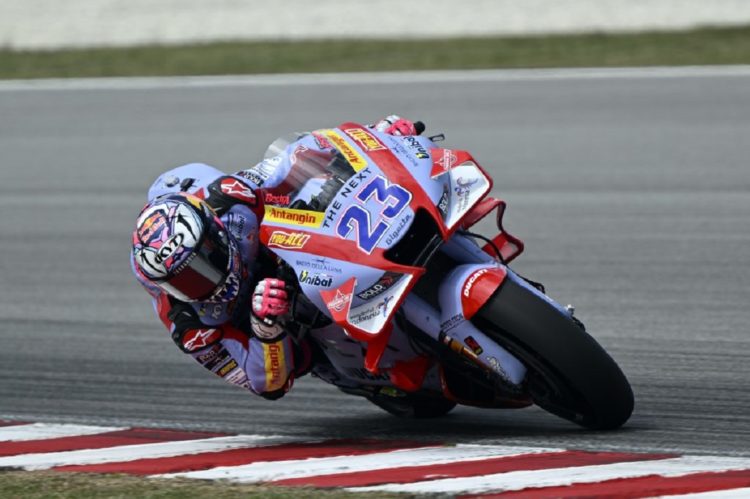 Enea Bastianini continued his rapidity from the opening day of pre-season testing at the Sepang test by leading the way on the concluding day with a new outright lap record.

The Gresini Ducati ace ended Saturday running fourth on the timesheets aboard the GP21 version of Ducati’s premier class prototype, the Italian firing out the blocks early on the final day at the Sepang International Circuit as he shaded Saturday leader Aleix Espargaro prior to the lunch break.

Espargaro had managed to post an all new motorcycle lap record of the Sepang venue early on Sunday- a 1:58.157s –though his time at the head of the timing charts was short-lived as Bastianini banged in an even quicker 1:58.131s to move clear, a gambit that would remain unbeaten across the rest of the day due to a rain shower after lunch that limited running somewhat.

Espargaro would complete a strong test for Aprilia in second ahead of Pramac Ducati’s Jorge Martin, with Suzuki’s Alex Rins managing fourth on exactly the same time as the other RS-GP of Maverick Vinales.

Francesco Bagnaia featured higher up the table than he did on Saturday with sixth just ahead of 2021 MotoGP world champion Fabio Quartararo, with Marc Marquez once again ending up as the fastest classified Honda rider in eighth.

The Ducati and Honda’s respectively of Johann Zarco and Pol Espargaro completed a top ten covered by a slender 0.289s.

Joan Mir ended up 12th fastest after a small crash at Turn 15 in the early part of the day, while VR46’s Marco Bezzecchi also suffered a spill at the same bend en-route to 16th overall as fastest rookie.

KTM continued to run towards the bottom of the times, with Miguel Oliveria it highest placed racer in 15th, 0.570s adrift of Bastianini’s benchmark.

Other than its newly-crowned world champion Yamaha also found itself towards the foot of the leader board with RNF Racing’s Andrea Dovizioso a lowly 21st over a second adrift of the leader just behind test rider Cal Crutchlow, while Franco Morbidelli and Darryn Binder were 24th and 25th respectively.

The MotoGP contingent will now head off to the new Mandalika circuit in Indonesia for the second and final pre-season test that begins next Friday ahead of the championship curtian-raiser in Qatar.