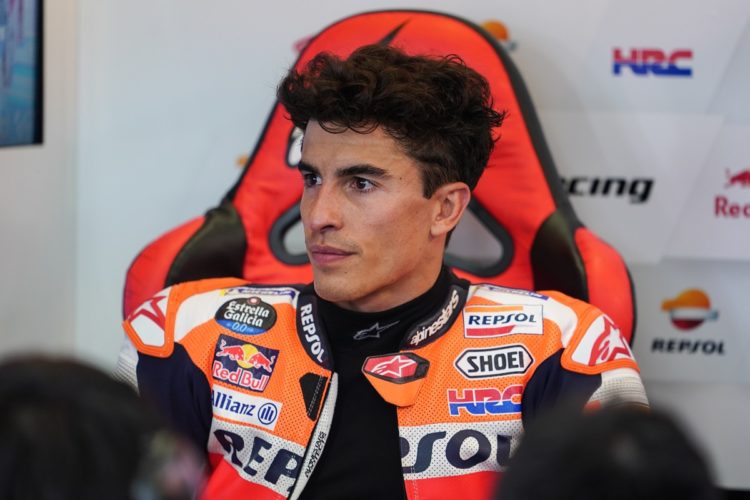 Marc Marquez will make his MotoGP return at the opening pre-season test of the year at Sepang early next month after his diplopia treatment has been deemed a “complete success.”

The Spaniard was set to miss the entirety of pre-season running after suffering the diplopia-essentially severely blurred vision- as a result of a motocross training crash, ruling him out of the final two contests of the 2021 campaign having just racked up back-to-back wins in North America and San Marino.

His Honda outfit announced two weeks ago that the treatment he was undergoing to remedy the condition was going well enough that he was able to return to track action, Marquez first testing a motocross machine before riding an RC213-S road superbike as well as a CBR600RR at the Algarve International Circuit and Motorland Aragon venues respectively.

The tests have been deemed a success-as well as his recovery-with Honda now confirming the six-time premier class world champion will take part at both the Sepang test as well as the second outing at the new Mandalika circuit in Indonesia a week later.

The Japanese manufacturer revealed that Marquez’s full recovery had been confirmed following a medical check on Monday, leaving him to make his return “at full strength.”

“Marc Marquez has been cleared to make his on-track return with the new Honda RC213V and the Repsol Honda Team at the Sepang Test on February 05, 2022,” began Honda’s statement.

“Throughout the winter Marquez has had continual medical checks and consultations to monitor his diplopia. In recent weeks the improvements in his condition saw his medical team deem his recovery sufficient to return to training on two wheels. The #93 first returned to the motocross track before trying the Honda RC213V-S in Portimao and a Honda CBR600RR in Aragon.

“Last Monday, January 24, Marquez underwent another medical check which reconfirmed that the treatment has been a complete success and the eight-time World Champion is in a suitable condition to ride a MotoGP bike.

“Therefore, it has been decided that Marquez will start his 2022 campaign at the first official MotoGP Test in Sepang before heading to Mandalika, Indonesia the following week. This will be Marquez’s first time back on a MotoGP machine since winning the 2021 Emilia Romagna GP ahead of Pol Espargaro.

“The Repsol Honda Team will head to the first test of the new season at full strength with Marquez alongside Pol Espargaro, who enters his second year with the team.”

Marquez’s return is timely for Honda as it continues to develop the newest evolution of its RC213-V following several years of campaigning one of the less user-friendly steeds on the grid that only the supreme talents of Marquez could get the most out of on a regular basis.

The new bike looks set to be much easier to extract potential from based off its first running at Misano and Jerez towards the end of last year based as well as the initial comments from Pol Espargaro, Takaaki Nakagami as well as Marc’s brother Alex, though the older Marquez’s input would have been severely missed had he have been unable to make his return until the first round of the 2022 term in Qatar at the start of March as originally scheduled.