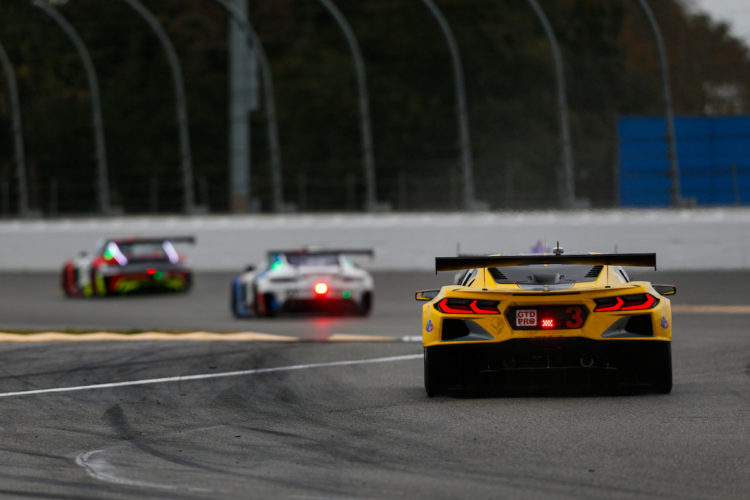 Corvette drivers Jordan Taylor, Antonio Garcia and Nick Catsburg are braced for a chaotic race in the new GTD Pro category at the Rolex 24 at Daytona, with the latter stating the mix with the pro-am GTD class will be ‘a big mess’.

The two Corvette C8.Rs will be part of a thirteen-car field in GTD Pro for the IMSA season opener, which will be in the mix with an additional 22 cars in GTD.

With the two cars operating on an identical Balance of Performance level, the performance advantage that Corvette had over the GTD cars in previous years has been eliminated with the introduction of the new class.

Additionally, as was seen during the 100-minute qualifying race at the Roar last weekend, the two classes might not be split in a way that occurred during the GTLM era. That means that two GTD Pro Corvettes could be starting the twice-around-the-clock enduro right in the midst of several GTD cars, some of which feature bronze drivers in their line-ups. According to Catsburg, the new dynamic will provide the all-pro squads with some significant new challenges.

“It reminds me of what we have in Europe where you have a Pro-Am class,” he said. “That makes it quite difficult because it’s hard to always know who is in the car at that time. It always feels like it is one big class together.”

“Everyone will fight each other, so I think that is what we will see in the race. I wish that some of the Pro-Am cars in Europe sometimes would just let you pass since we are racing our own race anyway.”

“But unfortunately it doesn’t work like that there and I don’t think it will work like that in Daytona. So I think it’s going to be a big mess but also an amazing show.”

According to the Dutchman, who won last year’s race in GTLM alongside Taylor and Garcia, the increased effort for the Pro drivers to pass GTD contenders could also have ramifications with regards to traffic and being lapped by faster prototypes.

“There are simply more cars to get around. For us to get around the GTDs – which are effectively in a different class but a similar speed – it is going to make for a lot of fighting on-track and we are going to side-by-side with DPis also wanting to pass.”

“In the past with GTLM, the differences were bigger so it was easier to pass or to just say I’m going to wait on this opportunity and I’ll take the next one.”

Catsburg’s comments were echoed by team-mate Taylor, who will be going for his fourth victory in the Rolex 24 after last year’s GTLM win and two previous overall victories with Wayne Taylor Racing.

“I think it is more fun to have a high grid count with quality cars. I think it becomes more difficult when you get some filler cars with lesser drivers and teams. It makes it difficult when you have some drivers who aren’t as experienced on the track in such a high-profile event, especially when we are going to have such a competitive field in our class.

“Say we come through in the middle of the night with 13 GTD PRO cars and you come up on someone with lesser experience who doesn’t know how to get out of the way. It can cause a lot of confusion on-track and incidents.

“We do have a big, quality field with all the GTD Pro cars. They all have amazing lineups and teams. I haven’t looked too hard into the Pro-Am categories. But as Nicky said earlier, we are here to put on a show for fans as well and that creates entertainment.

“The offseason has been pretty short but at the same time it seems too long. We are all excited to get back to the track and back to racing.”

Garcia, another Daytona veteran with three previous victories to his name, points to another possible consequence of the smaller performance gap between GTD Pro and GTD: the potential for one of the faster GTD teams to beat the GTD Pro entries and win the race as the fastest GT car over the twenty-four hours.

“It will be interesting, for sure,” he said. “I’m not used to that, and knowing we aren’t racing for the same result will be different. There could be a point where a GTD car is leading the GT field and end up winning the race.

“It will be strange for most of us. I don’t know if they are planning to split the classes in the pit stops or something. For sure, there will be a lot of play out. If you are leading, you’re going to want to have a ton of GTDs between you and the next Pro car. It’s going to be difficult to play out, especially on strategy.”

“If you decide to stop at the same time and you end up all the way at the back of the GTD field, it will make things even tougher. We don’t know how it will play out.”

The qualifying race on Sunday gave a brief glimpse into what the race this weekend could be like, with battles between GTD and GTD Pro cars up and down the field. According to Taylor, it will require extra preparation to try and stay out of trouble as much as possible.

“We all keep track of what races are going on where and we know drivers pretty well… who to look out for, who we can trust on track and who we have to be more careful around.”

“Our guys usually make notes on drivers on-track of who to look out for so when we do get in the race, they will say to us we are coming up on the 18 car with this driver, be careful of them. They do a good job of helping us with that. They keep us out of trouble as much as possible.”

“It’s the same thing with Prototypes when they are going by with who is in what car so we know who to leave a little more of a gap to than other guys.”