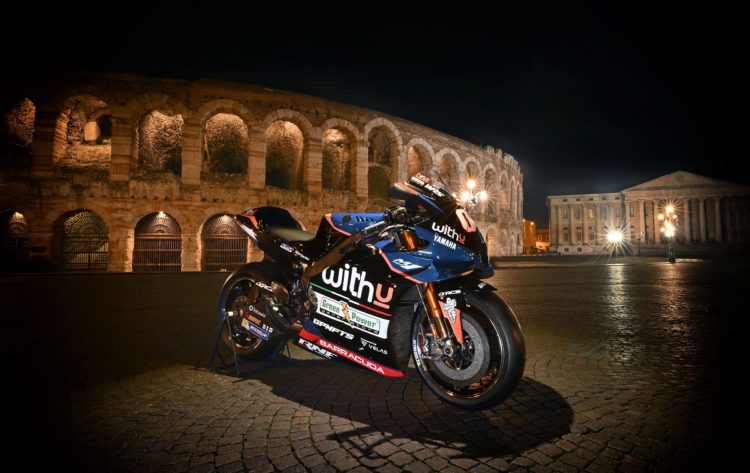 The re-branded RNF Racing MotoGP outfit have revealed the colours that will adorn its pair of Yamaha M1’s campaigned by Andrea Dovizioso and Darryn Binder.

The RNF organisation was born from the ashes of the Petronas SRT outfit that closed down at the end of 2021 following three seasons in the premier class, a consortium headed by SRT team principle Razlan Razali taking over the outfit with title backing from Italian fitness company WithU.

It elected to take over the Yamaha satellite supply deal its predecessor serviced, with the influence of its Italian sponsor leading to the signing of ex-Ducati rider Dovizioso, the three-time MotoGP vice champion being joined by rookie Binder to unveil its livery at the Philharmonic Theatre in Verona, Italy.

RNF will compete with a predominantly black and dark blue scheme for its maiden campaign, flashes of orange completing the look as a nod to the corporate colours of WithU.

Dovizioso was announced in joining the squad at the San Marino Grand Prix last year, the 15-time MotoGP race winner taking part in the final five races for the Petronas SRT team on a year-old M1 before switching to a 2022-spec bike as a Yamaha-contracted pilot this season.

He says he is “really ready” to begin testing with the re-branded operation at the Sepang International Circuit in Malaysia next month ahead of the opening round of the year in Qatar, Dovizioso revealing he had the metal plate inserted in his collarbone after he broke it last year removed last month in preparation for 2022.

“I’m really ready for this season! I’m training a lot in the gym, on my Motocross bike, I removed the plate on my collarbone early December in order to feel better for this year,” said Dovizioso.

“Everything is going well. I’m so happy to start this full season after five races of testing last year, which was very important to start early with the Yamaha, which is different to what I used the last eight seasons.

“I’m convinced that this will help me a lot to approach the tests and the races in 2022 in a better way. I know more about the bike, about the engineers and the team in general.”

“The new colours are adding to the amazing overall picture and I’m looking forward to the test in Malaysia.”

Binder-who becomes the first rider to jump directly from Moto3 to MotoGP since Jack Miller in 2014- added that he was expecting his maiden premier class campaign to be “awesome”, though says he will take things “step by step” as he learn to get accustomed to his much more powerful machine, the one-time Moto3 race winner being given a year-old Yamaha for his first term.

“The colours of my new bike are just beautiful!” enthused the South African.

I definitely can’t wait! It’s going to be so awesome, I’m very, very excited for my first season in MotoGP! Our goal is just to take it step by step.

“Obviously, it’s a big jump from Moto3 to MotoGP and I only want to take it gradually and build up as high as I can. I don’t want to do anything too crazy, but rather take one step at a time and go up slowly, but surely.