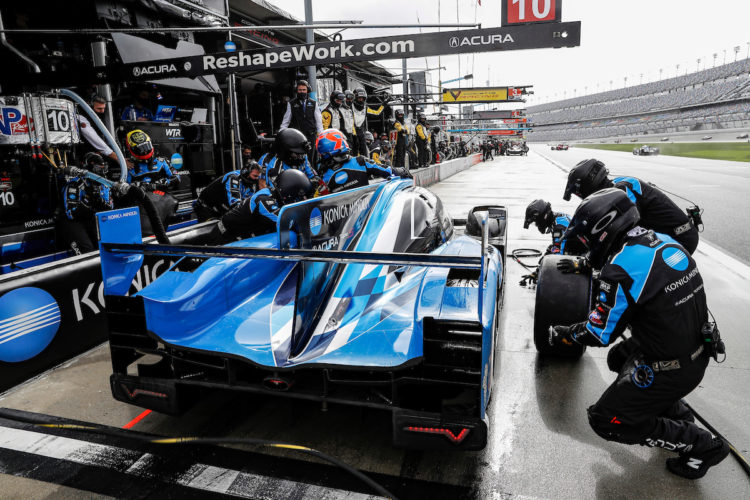 Ricky Taylor has set the quickest time in the opening session of the 2022 Roar Before the 24 as the cars took to the track for the first time.

The third and fourth places were locked out by the pair of Chip Ganassi Racing Cadillacs, each sporting new liveries. Sebastien Bourdais’ #01 DPi-VR took third, some six-tenths down on Taylor. Team-mate Kevin Magnussen ended up just 0.020s behind his French stablemate.

The session was halted by red flags twice: once at the very start of the session and once towards the end. The #26 Muehlner Motorsports Duqueine D08 caused the first stoppage, mere minutes into the session.

Giedo van der Garde comfortably led LMP2 as Racing Team Nederland made their Daytona return, as the #29 ORECA 07-Gibson posted a best time of 1m 36.262s, a second ahead of Tower Motorsport. LMP3 was led by the #38 Performance Tech Motorsports Ligier JS P320 of Garrett Grist.

The new GTD Pro category took to the track for the first time during the 75-minute session, officially replacing GTLM as IMSA’s top GT category.

The honour of setting the first fastest class time of the new era went to Mirko Bortolotti, who was quickest behind the wheel of the #63 TR3 Racing Lamborghini Huracan GT3 Evo. The Italian set a 1m 46.829s, 0.113s faster than the #9 Pfaff Motorsports Porsche 911 GT3 R of Matt Campbell.

Philipp Eng was third in the #24 BMW M4 GT3, with Maro Engel fourth in the #97 WeatherTech Racing Mercedes-AMG GT3 Evo and Jack Hawksworth making it five different manufacturers in the top five with the #14 Vasser Sullivan Lexus RC F GT3.

None of them, however, were the fastest GT car on track for the first session of the year, as they were all surpassed by Jan Heylen.