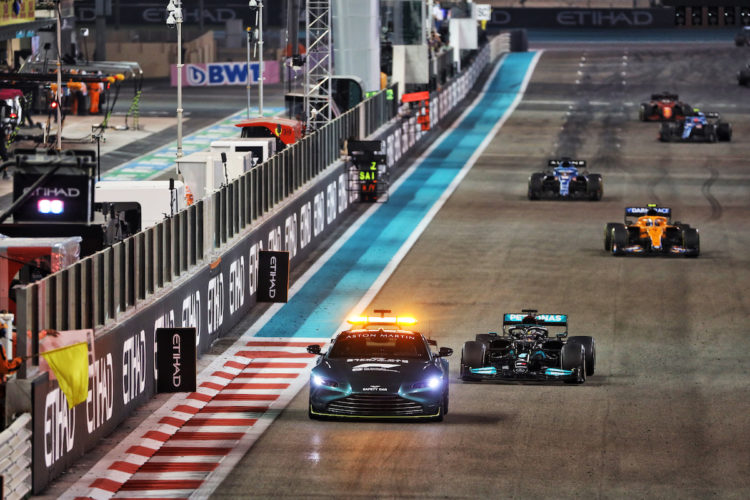 The FIA has confirmed that it has begun a “detailed analysis” of last year’s controversial season finale in Abu Dhabi, the findings of which will be announced on March 18.

Red Bull’s Max Verstappen beat Mercedes’ Lewis Hamilton to the world title in dramatic circumstances, as he overtook his rival on the final lap of the race.

Verstappen was able to complete the move following the intervention of a late Safety Car period, which saw him pit for fresh Soft tyres while Mercedes opted to keep Hamilton on the circuit.

Mercedes took issue with the FIA’s handling of the restart, believing that the protocols regarding a Safety Car restart were not properly followed.

It lodged an unsuccessful protest and followed up with a notice to appeal, however it soon after dropped its objection, while clarifying that it was determined to hold the FIA accountable.

On Thursday, the FIA released a statement that reads: “Following the decision of the World Motor Sport Council in Paris on 15 December, the FIA administration, under the leadership of Mohammed Ben Sulayem, has started the detailed analysis of the vents of the last Formula 1 Abu Dhabi Grand Prix.

“The FIA President launched a conclusion with all F1 teams on various issues, including this one

“On January 19, an item on the agenda of the Sporting Advisory Committee will be dedicated to the use of the Safety Car. The following stage will be a shared discussion with all F1 drivers.

“The outcome of the detailed analysis will be presented to the F1 Commission in February and final decisions will be announced at the World Motor Sport Council in Bahrain on 18 March.

“FIA President Mohammed Ben Sulayem has asked Secretary General Sport and recently appointed Single-Seater Director Peter Bayer for proposals to review and optimize the organization of the FIA F1 structure for the 2022 season.”

The findings will be announced during the opening weekend of the 2022 season in Bahrain.