The #42 Lamborghini Huracan GT3 Evo will be driven by Conwright alongside Don Yount, Benjamin Hites and Markus Palttala. All four drivers have already raced for the team during its first season in the IMSA WeatherTech Sportscar Championship last year.

“It’s definitely a big deal,” Conwright said. “I’m super grateful and happy to be the first recipient of this scholarship. I’m just looking forward to working with everyone and trying to create something that will be long-term and something that will help introduce more people into IMSA.

“I can’t thank everyone from NTE Sport enough for the opportunity to race with them again in 2022. Participating in my first Rolex 24 at Daytona and the first 24-hour race of my career is something I anxiously look forward to.”

“It’s been a busy and productive off-season, working with IMSA and Lamborghini for the first time, but I can’t wait to finally get the season started at one of the world’s most premier endurance sportscar races!”

“We had amazing pace at both Watkins Glen and Road Atlanta, and I look forward to sharing the car with Don, Benjamin, and Markus again, all together at Daytona.”

The Dallas-based squad used an Audi R8 LMS GT3 Evo for its debut season in 2021, but will now be making the switch to Lamborghini machinery by using a Huracan GT3 Evo provided by Star-Spangled Racing.

“I’ll be very excited to get the race season officially started,” said team owner Paul Mata. “We’ve had a lot of moving parts over the course of this short off-season, and I’m proud of the program we’ve put together.

“We’re thrilled to get to work with Chris Ward and everyone at Lamborghini Squadra Corse, and can’t wait to see what we can do with such a strong lineup. It’ll be a great season!” 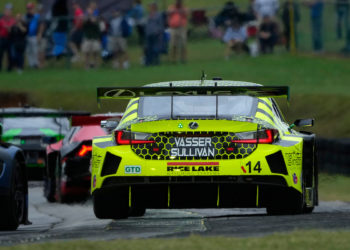