‘People said Alonso was difficult to work with – they were wrong’ 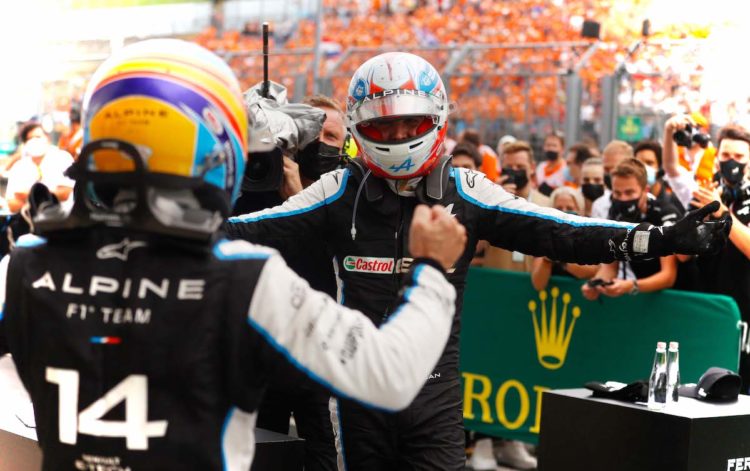 It was one of the most dynamic and intriguing driver pairings of the 2021 Formula 1 season.

Fernando Alonso returned from a two-year hiatus from Formula 1 to re-join the rebranded Alpine squad, while Esteban Ocon remained after a 2020 season with Renault that had been middling with an upturn in the closing stages.

After a full year, albeit with much focus on team growth and 2022, it’s difficult to definitively suggest Alpine has a standout lead driver. In normal qualifying sessions – Q1/2/3 not Sprint – they paired up at 11 apiece, and in the final standings Alonso held the upper hand by a slender seven points, at 81-74.

When Alonso departed F1 at the end of 2018, there was a sense of relief from many parties. He was – justifiably – tired of uncompetitive machinery, had tired of a championship he bemoaned as predictable, and wanted to explore different scenery.

Warnings of working alongside Alonso were evidently projected to Ocon as the two-time World Champion prepared for his full-time reunion with F1.

“I heard a lot of that for sure, a lot of people said Fernando was very difficult to work with, that he had a reputation for breaking team-mates and all that,” Ocon said. “I wanted to see it from my eyes, I wanted to see if what people were saying was true.”

Alonso’s 2007 campaign alongside Lewis Hamilton at McLaren will forever be one of the most tumultuous intra-team relationships the sport has seen, with references to the infamous partnership still being made even 15 years on. A lot of water has passed under the bridge since then.

The Alonso-Ocon relationship has so far been harmonious, almost older/younger brother style, given the 15-year age gap.

One of the best team plays of the year in Hungary assisted Ocon in delivering his maiden victory, and also the first for the Alpine brand in Formula 1. Alonso relentlessly held up old foe Hamilton in Hungary, denting the seven-time World Champion’s progress through the field. Hamilton finished just two cars and 2.7 seconds behind Ocon at the flag. When the favour needed repaying, in Qatar, Ocon attempted an (albeit briefer) defence against Sergio Perez when the Red Bull driver was in pursuit of Alonso’s podium.

Other racers have struggled against Alonso; Felipe Massa faded, Kimi Räikkönen languished, while Stoffel Vandoorne’s potential was extinguished before it was realised. There were mitigating factors in each specific circumstance, but Ocon has emerged from 2021 with his reputation intact – if not even enhanced.

“In the end it wasn’t [difficult to work with him],” Ocon explained. “We just had a fantastic collaboration all together. For sure he’s a hell of a racer, he’s extremely, extremely fast, the fastest team-mate I’ve had for a while. I was very happy to work alongside him.

“Also racecraft, I think I’ve picked up quite a lot of things from him, looking at his first laps, which is something I’ve always been doing, always been following what he has been doing. And towards the end of the year I was only gaining positions not losing any, and I was doing great first laps.

“It is a privilege to be working alongside a legend like him and I put him as a reference for sure in the beginning of the year and I was happy to see that I was matching him in terms of pace and we were pushing each other and in the end that gave the team the maximum we could have basically and were extracting the maximum out of the package most of the time so that was good.”

It’s all rosy and harmonious for now; on a normal weekend in 2021 Alpine was scrapping for the lower points-paying positions, and classified a distant fifth in the standings. It fell away from Ferrari and McLaren and was instead focused on fending off an AlphaTauri team that was overly-reliant on a single driver.

The pressure will be raised in 2022. Alonso’s Formula 1 return was motivated by the new technical regulations, having signed up in mid-2020 once their planned 2021 introduction was deferred by a year, while Ocon’s performances through last year convinced Alpine that he was worthy of a contract extension through 2024.

That creates a tantalising match up should Alpine deliver the breakthrough it craves, but for now its drivers are a strong fit, with both pulling in the same direction.

“Our driving styles are quite different but in the end our feedback are exactly the same,” Ocon outlined. “When both cars are working normally, we’ve had very close qualifying pace and all that, we had exactly the same feedback.

“Trying to experiment, for sure I did at some point, I was not obviously closing my eyes and just not looking at what Fernando is doing, but I think it’s been the team-mate I’ve been closest with in terms of set-up and actually driving, carrying the speed, exiting the corners, this has been very similar between us. So it’s been interesting.”