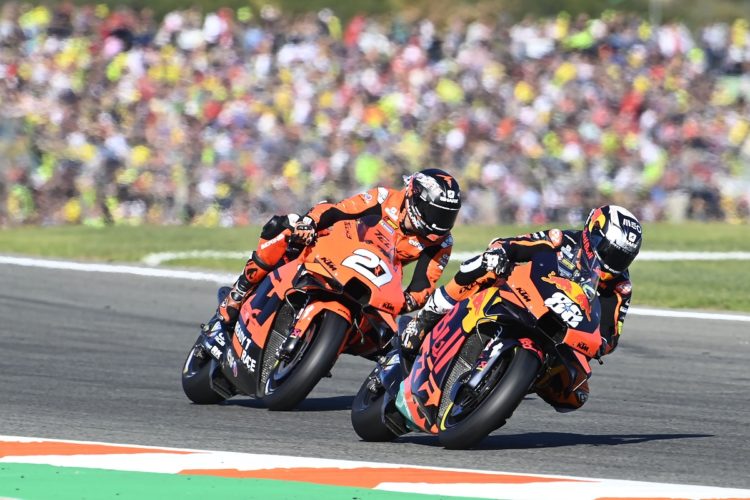 KTM is the subject of the final chapter of Motorsport Week’s look back at the six manufacturer’s of the 2021 MotoGP world championship season, a year in which the marque struggled to continue the head of steam it had created for itself across the preceding term.

The 2020 MotoGP season was something of a breakout year for KTM as the Austrian manufacturer finally escaped the clutches of the mid-field to become merited race winners-on three occasions no less-as well as ending up just four points adrift of second-placed Yamaha in the constructors standings.

Unfortunately it was unable to keep up the momentum it had accrued throughout the 2021 term, largely because of a change to softer compound front tyres that supplier Michelin elected to bring for the new campaign-doing away with the medium compound rubber KTM’s RC16 got on so well with last season.

Its struggles were illustrated by a disastrous Qatar double-header to start 2021, with factory KTM man Brad Binder scoring its best result of eighth in the Doha Grand Prix-Miguel Oliveira managing a best of just 13th across both encounters.

Things improved-for Binder at least- as he scored a superb fifth in the Portuguese GP, though Oliveira failed to finish higher than 11th before KTM introduced a timely chassis update for the Italian GP at Mugello.

The advancement rejuvenated the two-time premier class race winner as he flew to a first rostrum of the season by grabbing second behind runaway victor Fabio Quartararo, before racing to an emphatic third series success as he defeated the likes of the Yamaha rider and Pramac Ducati’s Johann Zarco in Barcelona.

The Portuguese ace’s electric form continued all the way until the summer break as he added his third-successive top two result in Germany- pushing race winner Marc Marquez all the way- while a run to fifth in the Dutch TT set tongues wagging about a possible title tilt, KTM left full of confidence heading to its home events in Austria after six weeks off.

A wrist injury after high-siding from his RC16 in practice for the Styrian GP put him on the back foot for the next few races, though thankfully for KTM its sophomore rider Binder was on top form.

A strong ride to fourth saw him continue the brands attack on the top five, but the best was yet to come for the South African.

He had managed to work his way into the top six once again in the latter stages of the Austrian GP, keeping the rostrum battle well within sight as he looked to try and stage a late charge-though a rain shower would turn the race upside down.

While the bulk of the leading train would peel off to pit for wet-weather tyres, the ever bold Binder elected to stay out and brave the rain for the final four laps on slicks.

Despite losing 15 seconds on the final lap alone to the wet runners-and picking up a three second penalty for track limits-he managed to hold on and score KTM’s second win of the year, a truly outstanding performance on a day where bravery was the tonic for victory.

This was as good as it would get for KTM in 2021 though as it mystifyingly lost the handle of its machine once again across the remaining seven events-Binder failing to breach the top five again while Oliveira’s form continued to elude him as he failed to finish higher than 11th.

This meant he ended up just 14th in the overall riders standings at the end of the year, though Binder at least managed to save some face by taking sixth outright-a hugely impressive feat as he failed to score just once all season, KTM slumping to fifth in the constructors.

Premier satellite team Tech 3 struggled to an even greater extent than the mothership squad, Danilo Petrucci and Iker Lecuona struggling to crack the top ten-the duo managing only four appearances in the ten all season- resulting in the French squad propping up the teams table down in 11th and last.

KTM is hard at work making wholesale changes to its challenger, as well as its management structure for 2022 following the replacement of long-time Team Manager Mike Leitner with ex-Pramac man Francesco Guidotti, who held the same post at the Italian outfit.

Oliveira insisted in the post-season Jerez test that the marque has to change the entire “character” of the RC16 to compete with its rivals going forward.

“We just need to wait until the bike is fully together (for 2022) then push it to the limit and see what we can do with it, at the moment this bike is still very similar to this years and the character is still the same and we need to change that to compete with our opponents.”

Tech 3 meanwhile will look to make a leap forwards with an all new riding line-up, Moto2 stars Remy Gardner-the freshly crowned intermediate class champion-and Raul Fernandez stepping into the ring as its new fighters, the two looking to reignite their rivalry that fuelled a thrilling title battle in Moto2 throughout 2021.