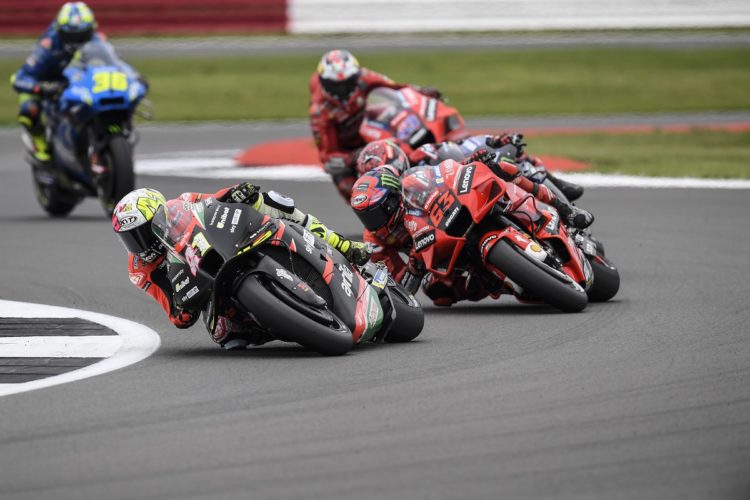 In the fifth edition of Motorsport Week’s six-part exploration of the 2021 MotoGP world championship season, we look at the emergence of Aprilia as a key player towards the front of the order in its final campaign working with the Gresini racing operation.

The 2021 MotoGP season was a story of evolution and not revolution for Aprilia following the introduction of its all new RS-GP machine for the 2020 campaign, the Italian marque looking to build upon its solid-but-unspectacular maiden campaign with its new contender.

To make this hope a reality Aprilia’s technical department-led by Romano Albesiano- brought a raft of upgrades for the RS-GP based upon the data it collated throughout 2020, including a lighter V4 engine that also brought a power increase, an improved chassis as well as enhanced aerodynamics that were developed in Toyota’s state-of-the-art wind tunnel in Cologne.

Espargaro certainly seemed to enjoy his new toy from the off in pre-season testing in Qatar as he figured frequently towards the head of the timesheets, even leading the opening day of running as he looked to challenge the established front-runners right from the dawn of the season.

Despite a few crashes just prior to the summer break from strong positions, the opening nine races of the campaign could be considered a roaring success overall as Espargaro was able to accumulate 61 points, a full 19 markers more than he was able to score across the entire 14-encounters of 2020.

The same couldn’t be said however of team-mate Savadori, the 2020 Italian Superbike champion struggling to adapt from the softer-construction of a superbike to the much stiffer MotoGP prototypes.

He could muster up just four points-his best coming with 14th in the Portuguese GP- though he at least managed to show potential as soon as soon as inclement weather arrived, the extra movement induced by the much softer-constructed wet compound tyres granting him a feel more akin to a production-based superbike.

This was most prevalent at Le Mans for the French GP as he posted the second fastest time in a wet FP3 on Saturday morning before leading Q1 to graduate to his first ever MotoGP pole shootout session, allowing him to score his best ever starting spot of 11th.

Savadori would suffer a scary crash at the Red Bull Ring-shortly after starring once again in the wet after topping FP2- as MotoGP returned for the Styrian GP after the unsighted ace slammed into Dani Pedrosa’s unmanned KTM at the exit of Turn 3, a crash that caused him to sustain a broken ankle, forcing him to miss the next two races.

A rather average pair of Austrian runs for Espargaro-a sole tenth his reward in the second Red Bull Ring event- brought a tough return to competition for Aprilia, leaving it hopeful of a return to form at Silverstone.

Espargaro was more than happy to oblige after qualifying a strong sixth before moving forward in the race to run second in the early stages behind brother Pol on his Honda.

Despite eventually being shuffled back behind eventual race winner Quartararo and Suzuki’s Alex Rins, Espargaro got the better of his brother to take the chequered flag a brilliant third to score his second career premier class rostrum result- Aprilia’s first in the series since Jeremy McWilliams’ second place finish at Donington Park in 2000.

His result was just rewards for the Gresini-run operation off the back of the impressive level of development brought in the off-season, a prize all the more emotional bearing in mind Aprilia’s racing partner had lost its figurehead and founder Fausto to Covid-19 just six months before.

Espargaro would back his stunning Silverstone run up with a fourth in the Aragon GP, his first with 2022 team-mate Vinales, who was confirmed to replace the still injured Savadori for the remainder of the 2021 term past Aragon having suffered an acrimonious split with previous employers Yamaha following the Austria double-header.

Aprilia’s 2021 season would take somewhat of a downturn across the final half-dozen contests, Espargaro and Vinales showing decent performance at both Misano races-Espargaro leading home Vinales in seventh and eighth in the Emilia Romagna GP-though the RS-GP looked awful at the Circuit of the Americas and the second Portimao event, a sole ninth for the former at Valencia its only bright spot.

Aprilia’s slightly mixed 2021 campaign was nonetheless a massive step forward relative to the new RS-GP’s first season in 2020, Espargaro ending up a full eight places higher in the riders table at the end of the year-moving from 17th in 2020 to eighth in 2021-with three times as many points as the previous campaign, an impressive gain even despite having four extra outings.

We will have to wait until the Sepang pre-season test next year to find out what Aprilia have brought after it elected to run its 2021 package in the Jerez post-season outing, though with Espargaro and nine-time premier class race winner Vinales on its books, arguably for the first time since its 2015 return it has nowhere to hide in terms of challenging for podiums and the odd win on a consistent basis.