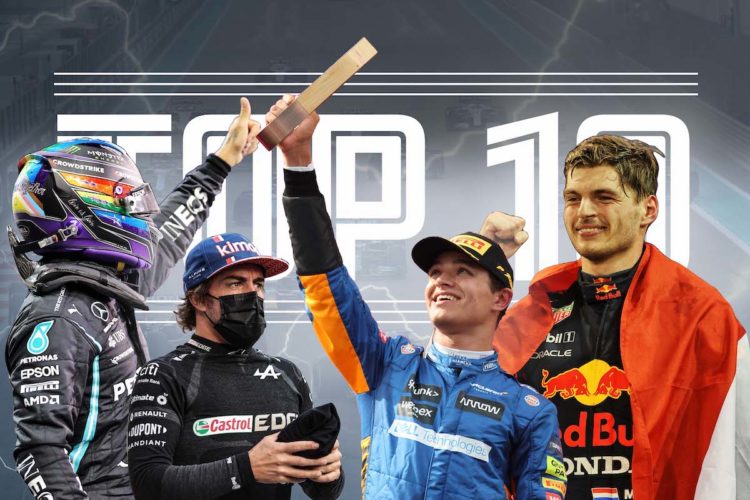 The 2021 Formula 1 came to a conclusion earlier this month, with Max Verstappen pipping Lewis Hamilton to the title in dramatic fashion in Abu Dhabi. The duo were one of many strong performers from the campaign. In this list, Motorsport Week outlines its top 10 drivers across the season.

Splitting Alonso and Ocon was very, very tricky – but Alonso just about edged it. That’s not disservice to Ocon, who displayed strong speed and resilience through the year. After a middling 2020 return season Ocon stepped up this year, and was able to adeptly recover from the low points, most notably after a bewilderingly poor Austria showing. Hungary was, of course, the high watermark, as he grabbed the opportunity that fell in his lap. There is a real sense that Ocon and Alpine are building towards something and a three-year contract extension gives both side plenty of time to execute their long-term vision.

Alonso’s F1 comeback was impressive. After two years exploring cars and racetracks elsewhere, he arrived home. It took a little time for him to gather his composure, but once he did, it looked as though he had never left. At 40 years of age, Alonso proved he still has a lot left in the tank, displaying excellent racing skills against Lewis Hamilton in Hungary, which assisted his team-mate’s maiden win. A trip to the podium greeted him in Qatar, but Alonso, a born winner, is hungry for more. His desire for an F1 comeback aligns with the new regulations, and if this year is anything to go by, the Spaniard will be more than capable in a competitive car.

It is always difficult to fully analyse a driver in a top team – every mistake is magnified and every good performance overlooked as merely the minimum expectation. Bottas’ final season with Mercedes was mixed: he scored third in the standings, contributed to another Constructors’ title, but picked up just a sole win. As usual he was stronger in qualifying than race trim, though made one too many mistakes – notably Hungary – yet was also struck by misfortune – especially in Monaco and Mexico City. Bottas has been an excellent and apolitical team player for Mercedes but it was the right time to split, allowing Mercedes to look to the future, while ensuring Bottas found a deserved multi-year deal elsewhere.

Life at Red Bull was tough to begin with for Perez. He had secured a dream drive with a championship-contending team, yet weekend after weekend, he was out-performed (often significantly) by team-mate Max Verstappen. He received a breakthrough result with victory in Baku, and as the season wore on, it became apparent that he was getting more comfortable with the car, especially in race trim. Aside from his win, his most notable moment came in Abu Dhabi, when he played the ultimate team game in holding up Lewis Hamilton, which proved to be crucial in the outcome of Red Bull’s championship success. If his late-season form is anything to go by, Red Bull may well be stronger than ever next year.

Gasly was already operating at a high level in 2020 yet still improved further in 2021. While this year lacked the stunning high of last season’s Monza victory, Gasly was regularly excellent, particularly during qualifying. On 14 occasions he started from within the front three rows and spearheaded the midfield more than once, taking superb fourths at Zandvoort and Mexico City, making a mockery of the standard of the opposition. There were missed chances, albeit usually out of his control, but ninth in the standings with over 100 points marked a superb season. He has rebuilt his reputation – and more – after that abortive Red Bull spell.

It was difficult to know what to expect from Sainz as he switched to Ferrari for this year. With little time to adjust to the car at pre-season testing, the Spaniard slotted into the Maranello-based squad comfortably. Although mistakes occurred here and there, he could be relied on, at the very least, to keep Charles Leclerc, who at this stage has an array of Ferrari experience, on his toes. Four podiums and fifth in the Drivers’ standings is more than a respectable start to Sainz’s Ferrari career, and if the team produces a car capable of winning next year, he shouldn’t be counted out of contention.

Leclerc’s 2021 had a peculiar outcome – he was at times phenomenally fast, placed a greater focus on race performance, yet for the first time in his career finished behind a team-mate in the championship. Leclerc’s poles in Monaco (even with the shunt) and Azerbaijan were brilliant, and he very nearly won in Britain. That it proved to be his sole 2021 was a strange aberration – and that he finished fourth six times shows how close he regularly came to adding to the tally. Big points went begging when he was T-boned in Hungary and erroneously gambled on slicks in Russia. When both Ferrari drivers finished the race it was 14-6 in Leclerc’s favour and he is well-placed if Ferrari makes its long-desired step in 2022.

Norris undoubtedly raised his game this season, at a critical point for him too. Daniel Ricciardo joined the team and was expected to challenge him – however, while the former Red Bull man struggled, Norris delivered and logged his most successful season to date with four podiums. A maiden win looked to be on the cards in Russia before late rain ruined his chances. McLaren’s pace in the second half of the season was down from where it started, but Norris proved to be consistent and reliable, which will only serve him well as he continues to dive deeper into his F1 career.

Even before the contentious finale Hamilton was always likely to be second on the list. He was astonishing in almost overturning a deficit that reached 33 points once, and was 21 just three races from home. His display in Brazil was exceptional and he was very canny and clever when battling Verstappen. But on the basis of the whole season he was marginally ‘less unlucky’ than Verstappen, and had more off-colour showings and mistakes: Imola, Monaco, Baku and Austria were all costly to a varying degree. He remains a great champion, an exceptional ambassador, and a gracious human being, whose words and actions should never be underestimated. There is no reason why he cannot take back his crown in 2022.

For such a long time, Verstappen was hailed as a star of the future and a champion-to-be. In 2021, he stepped up to another level, lived up to predictions and in the face of monumental pressure, produced a championship-winning season. The Dutchman was pushed all the way to the very end by Hamilton, but at times appeared to be the heavy favourite for the crown. Consistency was a major factor that contributed to his end-of-year result, as he finished either first or second on 18 occasions. Although it was a successful campaign, it was far from easy. Luck didn’t present itself very often, but it did crucially in Abu Dhabi. He topped the season in pole positions, wins and podiums and in the end, secured the championship that etches him into the most exclusive and prestigious section of F1’s history.