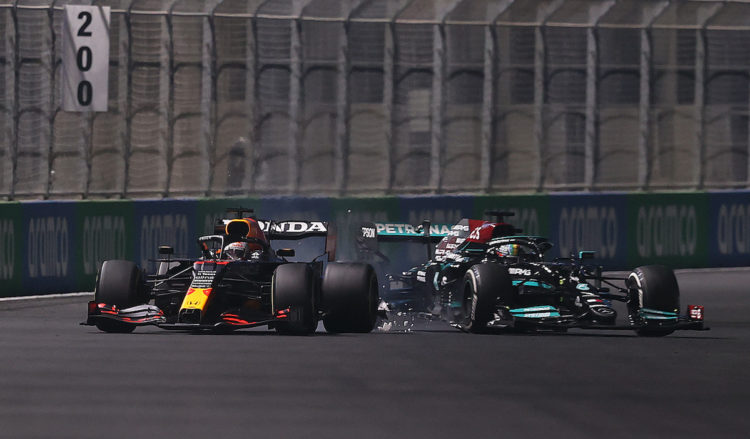 The 2021 Formula 1 season will remembered for good and bad reasons; we enjoyed amazing racing and a title battle that went down to the wire, but we also had to endure some rather dodgy stewarding and some questionable overtakes. But on the whole, we look back on the season with great excitement – a season that has had many memorable moments. Here are Motorsport Week’s top ten.

Before the 2021 season had even begun, the fight for the second Mercedes seat in 2022 was on between Bottas and Russell. It made their clash at the early round in Imola all the more wild and resulted in one of the most seismic shunts of the year. Thankfully, both drivers escaped without serious injury. With emotions running high in the immediate aftermath, Russell, who pinned the blame on Bottas, made an effort to run over to the Finn and slap his helmet in frustration. As a bonus moment, Hamilton, who had shockingly run into the gravel moments prior while lapping Russell, was handed a lifeline due to the red flag that the crash caused.

Rather surprisingly, Ferrari arrived at Monaco with an abundance of pace and began to mix it up with front-runners Mercedes and Red Bull. A dream scenario was unfolding for Leclerc. The local hero had a difficult track record at his home event, failing to finish both F2 races in 2017 and his F1 adventures at the Monte Carlo circuit in 2018 and 2019. But that all looked to be changing when he stuck his car on provisional pole during qualifying. However, moments later, Leclerc crashed while attempting to improve his time. Pole was his, but perhaps he would’ve traded that away for the heartbreak that came the next day. On the way to the grid, Ferrari uncovered an issue and Leclerc’s third home F1 race was over before it even began.

Hamilton’s (not so) magic touch

Verstappen was commanding the Azerbaijan Grand Prix when a sudden tyre failure pitched him into the wall. A red flag was issued, and Hamilton had the chance to snatch the win and take a huge lead in the Drivers’ standings. On the restart launch, he moved past Perez and looked set for the lead on the run into the first corner, before he locked up and ran off the escape road. It was discovered post-race that Hamilton had left the ‘brake magic’ switch on, which helps keep the brake temperature up, resulting in the error that saw him score zero points. Following the mistake, Sergio Perez went on to score his maiden (and so far only) victory for Red Bull.

Although we were treated to a close title fight this season, that didn’t come with controversy. Verstappen and Hamilton went wheel-to-wheel on a number of occasions this year, and often pushed each other over the limit. The first major coming together was at Silverstone, when Verstappen was pitched into the barriers at high speed. Bruised and beaten, he was taken the hospital, but it only proved to be the first of a handful of clashes. At Monza, Verstappen clobbered over the top of Hamilton’s car as they battle for position, with a spinning tyre touching the top of Hamilton helmet. In bizarre circumstances at the penultimate round in Saudi Arabia, they collided at low-speed before the final corner. They almost touched again at the season finale in Abu Dhabi, which was one of a number of close calls that occurred during the year.

It was perhaps the strangest race start in F1 history. Following the chaos caused by Valtteri Bottas and Lance Stroll at Turn 1 in wet conditions, a red flag was deployed to clear up the mess. On the restart, while the cars followed the Safety Car back around to the starting grid, everybody bar Hamilton pitted for dry-weather tyres, leaving Hamilton facing the five red lights all on his own. It proved to be the incorrect decision for Mercedes, as Hamilton came in on the following lap and dropped to the rear of the grid. He would, however, recover to third before being promoted to second following a post-race penalty for Vettel.

The craziness in Hungary didn’t stop with the baffling restart – Ocon navigated all the Turn 1 carnage and found himself in the lead of the race when Hamilton pitted for dry tyres. A strong defence and a little help from team-mate Alonso, who kept a recovering Hamilton behind him for a number of laps, allowed him to take his first victory in F1. It wasn’t the only surprising victory of the year. At the Italian Grand Prix, McLaren returned to the top step of the podium for the first time in nine years, courtesy of Ricciardo, who himself was enduring a difficult campaign up to that point. To sweeten the situation for the Woking-based squad, team-mate Norris followed him home in second for a 1-2 finish.

Torrential rain at Spa-Francorchamps made us all sit and wait for Race Control to begin the race. We waited and waited, and finally, cars made their move onto the track. With rivers and lakes lining the circuit, the drivers circled in formation for two laps behind the Safety Car before the race was called, with Verstappen declared the winner and half-points awarded. Russell stood on the podium for the first time as Williams obtained its first podium since 2017, while Hamilton was third. At an eye-rubbing time of 3m 27.071, it marked the shortest race in F1 history – a record that is unlikely to ever be broken.

It was looking so sweet for Norris. Saturday at the Russian Grand Prix saw the young Briton take his maiden pole position in F1. He commanded the race, until late rain destroyed his chances. It was the most dramatic end to a grand prix you could wish for, but there wasn’t a soul who didn’t feel for Norris as they watched him slip off the road on dry tyres, while Hamilton sailed past, having made the switch to the Intermediate compound. As torturous as the situation was, it was likely made so much worse for Norris due to the fact that just one race prior, he was instructed to sit behind his team-mate at Monza and settle for second place.

Hamilton suffered THE rollercoaster of emotions in Brazil. He took on a fresh engine prior to the weekend which meant a grid penalty for Sunday’s race. In qualifying, he put himself to the head of the pack for the start of the F1 Sprint, but was disqualified after the Stewards took issue with his rear wing. He started the shortened race from 20th, but skyrocketed himself to fifth in just 24 laps. With his engine penalty in effect, he took the start of the grand prix from 10th, but his superior pace advantage saw him best his rivals, overcome a tight defence by Verstappen and claim an astonishing race victory, re-igniting Mercedes’ championship hopes.

Fans were deprived of a close F1 title battle in recent years, and all that was being wished for was the fight between Verstappen and Hamilton to go to the final round of the season. Not only did that happen, but the championship was ultimately decided on the last lap of the last race of the year. Putting aside the controversial circumstances that surrounded the finale, it was fitting that the encounter, which had been too close to call all season, was sealed with just a handful of corners remaining in the campaign, capping off what has been one of the greatest ever F1 title battles.