Analysis: The controversial call, and what happens next? 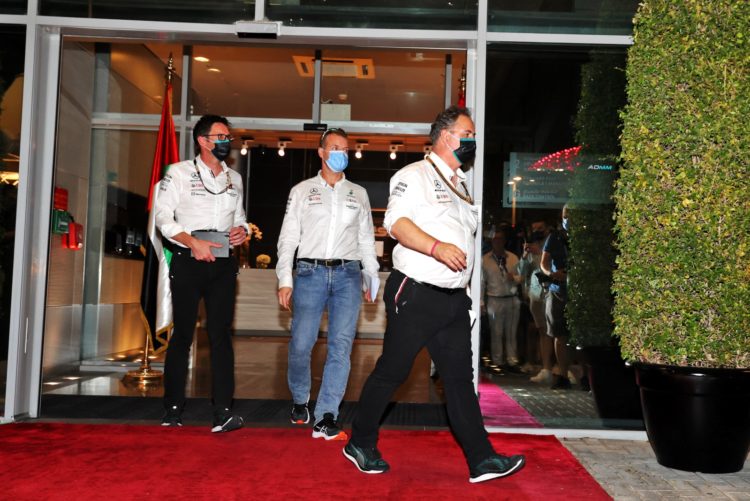 It ended as everyone feared it might – with figures from Mercedes and Red Bull discussing matters in the stewards’ room, long after the chequered flag in Abu Dhabi.

And it is still not yet quite over.

But fears that they would be arguing over a clash between Max Verstappen and Lewis Hamilton mercifully proved unfounded – even if they did come close on multiple occasions at Yas Marina.

The arguments centred on the handling of the late Safety Car restart that led to the sole lap of racing in which Verstappen passed Hamilton for the win and the championship.

The first protest – that Verstappen passed Hamilton prior to the restart – was flimsy and swiftly thrown out. Bar Verstappen briefly creeping a couple of millimetres in front of Hamilton there were no real grounds for a protest.

The Sporting Regulations themselves are long-winded, confusingly worded and stretch to a scarcely believable 98 pages. Article 48, across two pages, covers the Safety Car.

Mercedes claimed that two breaches of Article 48.12 had occurred. It came prepared, with Sporting Director Ron Meadows and Trackside Engineering Director Andrew Shovlin joined by Paul Harris QC. Harris recently won Barrister of the Year and previously represented Manchester City FC in its successful appeal against UEFA regarding its suspension from the Champions League, which went to the Court of Arbitration for Sport.

Mercedes outlined that the breaches related to “any cars that have been lapped by the leader will be required to pass the cars on the lead lap and the safety car” and that “once the last lapped car has passed the leader the safety car will return to the pits at the end of the following lap.”

As we know, Race Control initially atypically said lapped cars would not be permitted to pass, then allowed only the five lapped cars between Hamilton and Verstappen to unlap themselves, then gave notice to restart at the end of the lap.

Mercedes argued that had this been complied with Hamilton would have won the race. They requested an amendment to the race result under Article 11.9.3.h of the FIA’s International Sporting Code. That article pronounces that stewards “may amend the classifications” under the jurisdiction that they hold.

Red Bull was permitted to attend “as an interested party” and did so with Sporting Director Jonathan Wheatley, Team Principal Christian Horner and Technical Director Adrian Newey.

Red Bull argued that in Article 48.12 “any” does not mean “all” and that Article 48.13 states that the message ‘Safety Car in this lap’ is the signal that it will enter the pit lane at the end of that lap – overriding Article 48.12. It also highlighted Article 15.3, which gives the Race Director “overriding authority” on several matters, including “the use of the safety car.” Red Bull also highlighted that even if all of the eight lapped cars were permitted to unlap themselves it would not have changed the race’s outcome.

Formula 1 Race Director Michael Masi outlined that the purpose of Article 48.12 was to remove lapped cars that would “interfere” in the racing between the leaders – and that from his perspective Article 48.13 was the one that applied in this case. He also stated that teams had long agreed that where possible it was highly desirable for races to end in green-flag conditions and not behind the safety car.

In dismissing the protest stewards determined that Article 15.3 allows Masi to control the use of the safety car, including its deployment and withdrawal. It accepted that “although Article 48.12 may not have been applied fully, in relation to the safety car returning to the pits at the end of the following lap, Article 48.13 overrides that.” Stewards concluded that “once the message ‘Safety Car in this lap’ has been displayed, it is mandatory to withdraw the safety car at the end of the lap.” Stewards deemed that Mercedes’ request to amend the race results was “not appropriate” as it is “effectively shortening the race retrospectively.”

No Mercedes personnel spoke to the media. Hamilton conducted the post-race world feed interview with Jenson Button but skipped the TV pen and press conference. Technically this is a breach of Article 56.1 of the Sporting Regulations. They now have no obligations to speak but are mandated to attend the FIA Gala on Thursday, with Hamilton due to collect the runner-up trophy and Toto Wolff the Constructors’ trophy.

It is an exceptionally convoluted decision and still open to interpretation – hence Mercedes’ quick reaction to notify its intention to appeal, giving it time to assess the situation. If it does proceed with an appeal then it will likely need to present new evidence that was not available at the time – as has happened with prior appeals this year. It is also a highly unusual situation in that, whereas stewards are usually interpreting the regulations to determine any sanction against a team or driver, this time it is the actions of the FIA’s Race Director under scrutiny.

In justifying dismissing the protests the stewards effectively agreed that one Article (48.13) overrules another (Article 48.12) and that in any case both are superseded by another (Article 15.3). If that is the case then it very obviously leads to doubt going forward over how, where and in what way the regulations will be enforced for anything which Article 15.3 covers, and in effect makes a host of other Articles superfluous. If what the Race Director says goes, over other Articles, then matters are surely open for interpretation going forward. Masi’s assertion that teams have expressed a desire to finish under green is fine, but it is not written down in the regulations.

While there were very obvious implications for the title deciders, the way the restart was handled also influenced the result further down the order; Carlos Sainz had the lapped Daniel Ricciardo and Lance Stroll in front and had to contend with the AlphaTauris on Softs in the last stages. Ricciardo and Stroll were also miffed at having pitted for Softs but then being denied the chance at attacking rivals directly ahead, who were given the all-clear to unlap themselves. And the quintet of ‘unlappers’ fronted by seventh-placed Lando Norris were 50 seconds behind sixth-placed Valtteri Bottas.

At last year’s Eifel Grand Prix, in explaining why a Safety Car phase was so long, Masi outlined that per the Sporting Regulations he had to allow all of the lapped cars to unlap themselves.

There is no mechanism in the Sporting Regulations for retrospectively changing the race result if indeed there was to have been an officiating error. Results are only be taken back in the event of the race being suspended and not restarted – which was not the case. It reached its full distance. And, in any case, the stewards rejected the protest.

Article 11.9.3.h of the FIA’s International Sporting Code remains present in that stewards can amend the classification – yet this has already been rejected. Mercedes would have to present new evidence that was not available at the time in order for the case to be reviewed. It is difficult to envisage what, if any, new evidence could be forthcoming. And, in the improbable event of any appeal being successful, it would surely be an even worse outcome – having the title change hands in court. For now, Mercedes is merely in the process of deciding whether to proceed with an appeal, so everyone just has to wait.

The Race Director has an incredibly challenging job, as do the stewards, the latter not even remunerated for their services. Officials in any sport are rarely popular. Someone is always likely to be unhappy. It is not as if everything was perfect before 2019, prior to Masi’s sudden ascension to the role in difficult circumstances, and any accusations of bias or favouritism from any camp are just wrong and unfair.

But it is not the first time that Race Control, and the application of the regulations, has been called into question this year. And in this instance it had a massive influence in the outcome of an entire championship. A deep-rooted analysis of the entire structure must surely be needed for the sake of greater sporting integrity moving forwards.