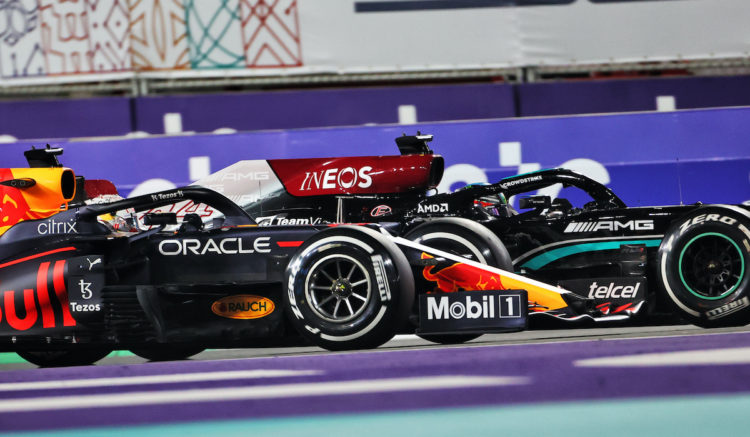 Lewis Hamilton says he was left confused as to why Formula 1 title rival Max Verstappen “hit the brakes” during the Saudi Arabian Grand Prix, which led to the pair clashing, and described his driving as “over the limit”.

Verstappen had been leading Hamilton, but on Lap 37 the Mercedes driver launched a move for the lead down the outside at Turn 1, only for Verstappen to lose the rear and force both off track. Red Bull informed Verstappen to hand the place to Hamilton.

Verstappen then slowed dramatically ahead of the final corner, seemingly catching Hamilton unaware. The Briton then ran into the back of his title rival, sustaining heavy front-wing damage.

Verstappen later let his rival through again and Hamilton would go on to win the race, with the Dutchman receiving a five-second time penalty for his off-track excursion, whilst both remain under investigation for their clash.

Hamilton believed at the time that Verstappen had brake checked him: “I didn’t quite understand why suddenly [Verstappen] hit the brakes pretty heavily.

“I ran into the back of him, and then he moved on. So I didn’t understand exactly what was going on.

“I got a message afterwards that he was going to let us past. So it was a bit confusing.”

Asked about Verstappen’s tactics, Hamilton went on to describe his rivals driving as “over the limit”.

“For me, I really had to try and just keep my cool out there, which was really difficult to do. I’ve raced a lot of drivers in my life, in the 28 years, I’ve come across a lot of different characters. There’s a few at the top which are… yeah, over the limit. Rules kinda don’t apply, or they don’t think of the rules.

“He’s over the limit, for sure. I’ve avoided collision on so many occasions with the guy and I don’t always mind being the one that does that, because you live to fight another day. Which I obviously did.

“It doesn’t matter for him if we both don’t finish. For me we both need to finish. It will be interesting to see what happens,” he added.