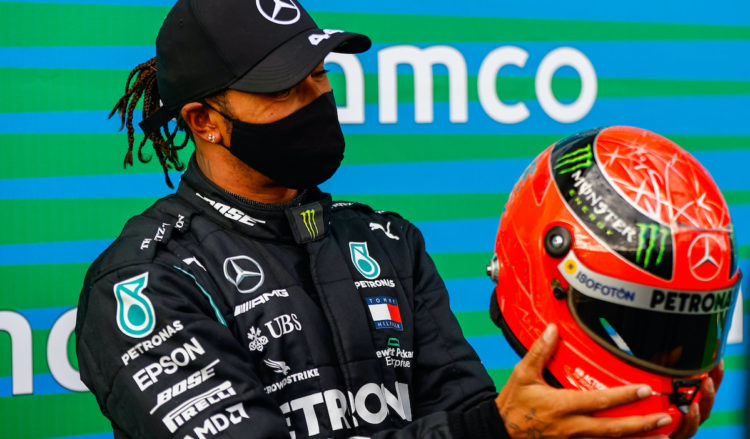 Bernie Ecclestone says he’s “surprised” Lewis Hamilton continued to race in 2021, with the Mercedes driver on the cusp of surpassing Michael Schumacher’s title tally of seven.

Hamilton is locked in an intense title battle with Red Bull’s Max Verstappen. The pair are split by just eight points in Verstappen’s favour, but Hamilton has won the previous two races, and with just two remaining, the title battle is far from over.

It would mark a maiden title for the Dutchman, but if Hamilton were to win, it would be his eighth – an all-time Formula 1 record, surpassing Schumacher’s seven, with which Hamilton is currently tied.

Hamilton does however have more pole positions and race wins than any other driver by quite some margin (102 wins to Schumacher’s 91). Therefore already F1’s most successful driver, adding an eighth title wouldn’t necessarily place Hamilton ahead of Schumacher in terms of talent, according to Ecclestone.

“No, not at all,” former F1 boss Ecclestone told RTL. “In fact, I’m surprised Lewis didn’t say at the beginning of the year ‘I’m stepping down, I don’t want to win more races or World Championships than Michael’.”

Hamilton has previously said records mean very little to him, but that equalling the title tally of his childhood hero, Ayrton Senna, would mean a lot. Hamilton of course achieved that in 2014 when he claimed his second title.

Had Hamilton called it a day, we would have been robbed of what has been one of the most closely matched seasons in recent memory, which Ecclestone has welcomed following years of dominance by the 36-year-old and his Mercedes team.

“It’s a fight we’ve been waiting for seven or eight years, finally a competition again,” he added.

“This is what people want when they watch Formula 1, or any sport for that matter. They want competition.”